85% believe the rights of women and girls are a “very high priority”; two-thirds think more participation from women will lead to a more peaceful world 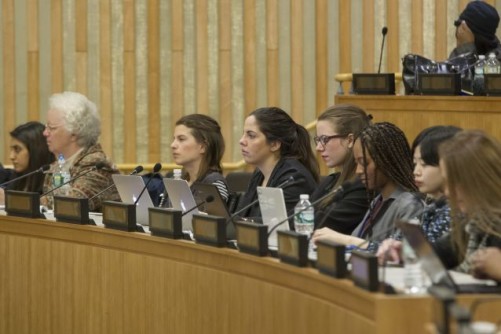 Forum on Gender Equality and Empowerment of Women and Girls

Newswise — (MEDFORD/SOMERVILLE) November 7, 2017 — Most Americans strongly support a U.S. foreign policy that promotes global gender equality, according to a new survey by researchers at Tufts University. The survey also found that Americans’ support for the advancement of women and girls remains high even when those goals conflict with priorities, such as international trade or relations with friends and allies.

Released this week, the survey of 1,000 American adults was conducted by researchers from Tufts University’s School of Arts and Sciences and the Jonathan M. Tisch College of Civic Life. It is one of the first surveys to assess views on specific policy programs that the U.S. government has implemented in support of human rights and women’s rights.

According to Richard Eichenberg, a Tufts University professor of political science and lead author of the survey assessment, this research demonstrates that American public opinion aligns with the U.S. government’s strategy to make global gender equality a priority in foreign policy.

“The finding that most Americans agree with the government’s efforts to promote women’s empowerment globally is meaningful, given the level of commitment the United States has devoted to this goal,” he said. “Even more significant is the public’s willingness to tolerate tradeoffs with other policy goals to promote gender equality.”

The research also finds that Americans’ commitment to women’s rights around the world can have implications for electoral politics. A third of all respondents say that they would be more likely to support a congressional candidate who promoted women’s rights in foreign policy, compared to only 6 percent who say they would be less likely to support such a candidate. Among Democrats, a majority of both women and men strongly supported the pursuit of global gender equality, while among Republicans the level of support is smaller from respondents of both genders. This pattern is similar throughout the survey: large majorities of respondents from both parties agree or approve of gender equality policies, but Democrats and women are more likely to endorse them “strongly.”

“Notably, we found that very small percentages of voters would be swayed by political candidates’ support of global gender equality policies, suggesting that candidates may not feel the need to make his or her views clear on this topic,” said Kei Kawashima-Ginsberg, Director of the Center for Information and Research on Civic Learning and Engagement (CIRCLE) at Tufts University’s Tisch College.

The researchers plan to conduct further studies to investigate political differences among demographic groups in the survey.

The survey was conducted through YouGov, a data and analytics company, in early September.

Additional authors on the survey report include Noorya Hayat, a researcher at the Center for Information and Research on Civic Learning and Engagement Jonathan M. Tisch College of Civic Life Tufts University, and Anna Jacobson, a graduate student at the Fletcher School of Law and Diplomacy at Tufts.

The only university-wide college of its kind, the Jonathan M. Tisch College of Civic Life offers transformational student learning and service opportunities, conducts groundbreaking research on young people’s civic and political participation, and forges innovative community partnerships. Its work is guided by two core beliefs: that communities, nations and the world are stronger, more prosperous, and more just when citizens actively participate in civic and democratic life; and that higher education has a responsibility to develop the next generation of active citizens.