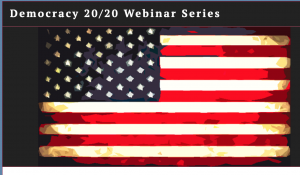 Newswise — A group of political science scholars is launching a webinar series on Friday to highlight escalating threats to democracy that have been percolating for decades and boiling over ever since Donald Trump’s election.

The American Democracy Collaborative is scheduled to kick off its Democracy 20/20 webinar series with a 1 p.m. session called “The Protests and U.S. Democracy” to discuss how recent demonstrations for racial justice and civil rights could affect November’s elections. It will be the first in a series of monthly online discussions through the remainder of 2020.

“The political environment in the United States has been pretty grim,” said Robert C. Lieberman, a Johns Hopkins University political science professor and co-founder of the collaborative sponsoring the events. “Every time you think it can’t get any worse, you look at your phone or pick up the paper and it’s worse.”

Reporters and members of the public interested in attending the 75-minute webinar are encouraged to register at this website. Other sessions will examine topics such as free and fair elections in November, police use of force, checks and balances, political polarization, and assaults on the expertise amid the so-called “deep state” of government officials.

The collaborative formed months after Trump was elected in 2016 to better understand and expose the troubling trends that for decades had been paving the way for such an unorthodox executive – trends that could continue to erode American democracy if left to fester.

Members of the collaborative, which includes scholars from Cornell University and Swarthmore College as well as Johns Hopkins, say Trump has magnified each divisive issue and used them to energize his base of white conservative voters.

“This is not just a Trump problem though,” Lieberman said. “He is a symptom of deeper problems in American political life that have been around a long time and have been gathering steam.”

The online sessions intend to explore the broader political forces beyond the headlines – especially how they compare to other nations whose democracies faltered under similar prevailing pressures.

“We’re looking to place these events into a larger context and determine what they mean for the integrity of American democracy,” Lieberman said.

Since the United States has not faced such a multitude of simultaneous domestic threats in modern political history, the collaborative includes several experts in comparative politics. Lieberman and Cornell Prof. Suzanne Mettler are American Democracy Collaborative founders as well as co-editors of the Oxford Handbook of American Political Development as well as co-authors of the forthcoming Four Threats: The Recurring Crises of American Democracy.

Johns Hopkins University news releases are available online, as is information for reporters. To arrange a video or audio interview with a Johns Hopkins expert, contact a media representative listed above or visit our studio web page. Find more Johns Hopkins stories on the Hub.