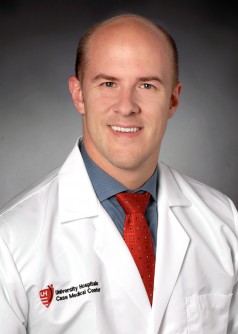 He holds the Penni and Stephen Weinberg Chair in Brain Health at UH and is an associate professor of neurology and biomedical engineering at Case Western Reserve University School of Medicine.

Dr. Walter joined UH in 2008 after four years at Cleveland Clinic, where he directed the movement disorders fellowship program.

He earned his medical degree from MCP-Hahnemann School of Medicine in Philadelphia. He completed his internship in internal medicine and residency in neurology at Emory University Hospital, as well as fellowship training in movement disorders with an emphasis on intraoperative mapping and deep brain stimulation.

In his research laboratory, Dr. Walter uses functional MRI to study mechanisms underlying changes in Parkinson’s disease and dystonia, participating in several projects funded by the National Institutes of Health (NIH). He is currently an investigator on an NIH-funded project exploring intracortical control of arm and hand function restored by functional electrical stimulation in people with spinal cord injury (Brain Gate). He has also served as an investigator on the Enhanced Exercise Study for Patients with Parkinson’s Disease (EXCEED) study of how exercise and education affects people with Parkinson’s disease and depression, as well as on an NIH-funded project to develop an “intelligent” bicycle for rehabilitation in Parkinson’s patients.

In addition, Dr. Walter has served as an invited lecturer/instructor at national and international medical education conferences and colloquia. He is grant reviewer for the NIH and the American Association for the Advancement of Science and also reviews manuscripts for several prominent medical journals. He is a member of the Organization for Human Brain Mapping, Society for Neuroscience, American Academy of Neurology and the Movement Disorder Society.

University Hospitals has a high definition broadcast studio on its campus with satellite connection capability.