Perception of US democracy tanks after Trump impeachment 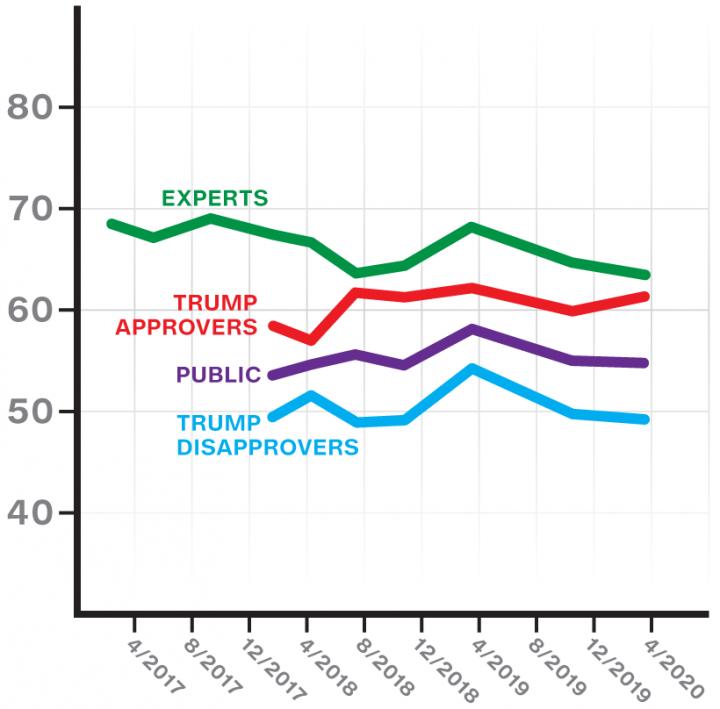 Ratings of the health of US democracy by experts and the public on a 0-100 scale. The figure shows average values across survey waves.

Newswise — While President Donald Trump's impeachment gripped the country in late 2019 and early 2020, the long-term consequences of his trial and acquittal for American democracy remain yet unclear. What's clear already, however, is that both the public's and political experts' perceptions of the health of US democracy clearly declined during this period.

Those are the findings of an academic watchdog group that conducted its latest survey between March 12 and April 15.

Since February 2017, Bright Line Watch, a nonpartisan group of political scientists, has been surveying the American public as well as colleagues in academia in an effort to gauge the relative well-being of the nation's democracy. The group, which includes University of Rochester political science professor Gretchen Helmke, has been monitoring US democratic practices and potential threats.

The Bright Line Watch surveys consist of a two-part list of more than 25 statements of democratic principles that contribute to the overall stability and performance of American democracy. The first part asks citizens and experts to rate these democratic principles on how vital they are for democracy. The second part asks both citizens and experts how the US is performing on each of these principles.

Among the experts, the latest survey recorded 63.4 on a 0-100 scale of US democratic performance-- the worst overall rating since Bright Line Watch started asking these questions in 2017.

During the last year, the experts' ratings dropped on 15 of the 27 surveyed democratic principles, while none showed improvement. The biggest declines in performance relate to accountability, institutional checks and balances, and the rights and protections of individuals.

Ratings among the public show a similar decline, dropping from 54.3 in March 2019 to 49.3 a year later. Both expert and public evaluations mark substantial declines from a peak after the 2018 elections, which the team attributes to "an apparent increase in legal and political checks on President Trump following the 2018 midterm election, including investigations into the administration and the President's associates by law enforcement officials and Congress."

Meanwhile, the recent declines continue the trend already observed in the group's October 2019 survey. That drop came after the whistleblower report on Trump's Ukraine phone call.

Worth noting is that the decrease in public ratings is driven by Americans who disapprove of the president. For this group, assessments of democracy declined between March and October 2019 and remained low in the most recent survey. By contrast, ratings were stable among Trump approvers, the team writes in its latest survey.

The survey found that experts:

The survey of the general public showed that:

"We cannot establish any firm causal connections between real-world events and expert responses," says Helmke. "But the fact that the biggest declines correspond to measures related to accountability and checks and balances means our latest results are certainly consistent with the concern that the impeachment and acquittal of President Trump has had negative consequences for the experts' perceptions of the health of American democracy."

The scientists found strong consensus among the expert sample that the results of the impeachment and subsequent acquittal would embolden President Trump (79 percent) and that the effect would similarly embolden future presidents (59 percent).

"In our system, checks and balances function mainly as deterrents," Helmke says. "If politicians no longer believe that they will be sanctioned for pushing--let alone breaking--the law, then future transgressions become that much more likely."

However, the Bright Line Watch team cautions that the survey was conducted under the long shadow of the novel coronavirus. While the results are largely consistent with past surveys, it is too early to tell how the pandemic might have influenced survey responses.

What is Bright Line Watch?

One of the greatest threats to democracy is the idea that it is unassailable. That's the tagline of the nonpartisan Bright Line Watch initiative originally founded by University of Rochester's Gretchen Helmke and three other political scientists--Brendan Nyhan and John Carey of Dartmouth College, and Susan Stokes of the University of Chicago--that gauges the health of US democracy at regular intervals.