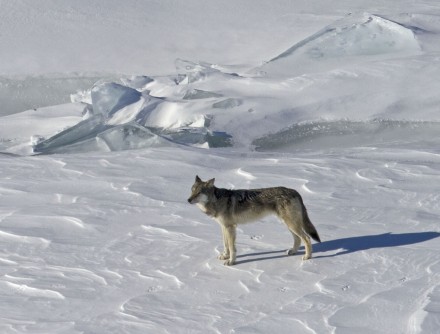 Vucetich, Bruskotter and their team analyzed survey data about the Endangered Species Act and showed that support for the policy is widespread. They also analyzed whether this trend holds in areas where controversial endangered species have led to conflict between different groups of people; they used the gray wolf as an example and found that support for the act is consistently high.

Newswise — In the past two years, nearly 150 amendments, bills and riders aimed to weaken the U.S. Endangered Species Act. However, a new study indicates that four in five Americans support the act and this support has remained stable over two decades.

The Endangered Species Act is portrayed – by critics of the law, often by the media, and sometimes by conservation professionals – as increasingly controversial, partly due to the protection of species such as wolves and spotted owls. These portrayals suggest that public support for the law may be declining.  However, new research indicates that support for this law has remained consistently high over the past two decades.

The fresh survey data and analysis are laid out in a new paper, published last week in the Society for Conservation Biology's journal Conservation Letters (DOI: 10.1111/conl.12595), by a team from Michigan Technological University, the Ohio State University and California State University.

Because of the rift between citizens and government officials, the authors say the Endangered Species Act has joined the ranks of issues like gun control and climate change where political action veers from public opinion.

The team – comprised of social scientists, ecologists and ethicists – found in a 2014 survey of 1,287 people that nine percent, only one in ten people, opposed the Endangered Species Act, while majority support for the act—79 percent, or four in five people—has remained stable for the past two decades. Additionally, this trend holds across people who identify with various special interests, including interests such as ranching and land rights that lobbyists claim are opposed to the act.

John Vucetich, professor of ecology at Michigan Tech, adds that the false controversy around the Endangered Species Act has been amplified by new media. He explains that if the act was highly contested by the public, then the survey data should show a bi-modal split between groups that "strongly support" or "strongly oppose" the act.

"The Endangered Species Act is a genuine point of American pride; it’s considered one of the best laws in the world for conserving biodiversity," Vucetich says. "So why don't our representatives represent us?"

Political conservatives, ranchers and other interest groups support the act

The team assessed survey and poll data gathered in 2015, 2014, 2011 and 1996, using the 2014 data to look at people who self-identified their political affiliation as well as their affinity for various special interests, such as farming, ranching, land rights and hunting. They found that within groups that are often portrayed as opposing the act, there was actually a lot of support: 74 percent of political conservatives (15 percent oppose), 71 percent of farmers and ranchers (19 percent oppose), 70 percent of property and land rights advocates (21 percent oppose.)

Additionally, Vucetich and his co-authors dug into a case study to see if there was greater opposition to the act in regions of the U.S. where the protection of wolves – one of the most controversial of protected species—had been a high-profile issue. The researchers found support was similarly high across regions of the U.S.

The question that emerges is, why? Vucetich and coauthor Jeremy Bruskotter from the Ohio State University want to consider what prevents or entices government officials. Past research has documented that government officials are most responsive to wealthy elites and organized interest groups when it comes to politicized issues. Bruskotter suspected the public’s impression of the Endangered Species Act might not align with the perspective of business and political interests debating its future and seeking to roll back its reach.

“Scholars, the media and others keep talking about how controversial the act is and we wanted to know whether that was really true in the population at large,” he says. ““I don’t think at any time, maybe since the act was passed, have there been this many members of Congress working in direct opposition to the act, but that doesn’t mean that they’re acting in the interests of the people they represent.”

What Vucetich and his co-authors hope to call attention to is the widespread support for the Endangered Species—support that is not mirrored by political actions, which likens the issue to policy challenges around gun control and climate change.