By incorporating the social science concept of “rigidity of the extreme” into a popular opinion dynamics model, work in chaos theory points to the effects the strongly opinionated have on those around them. 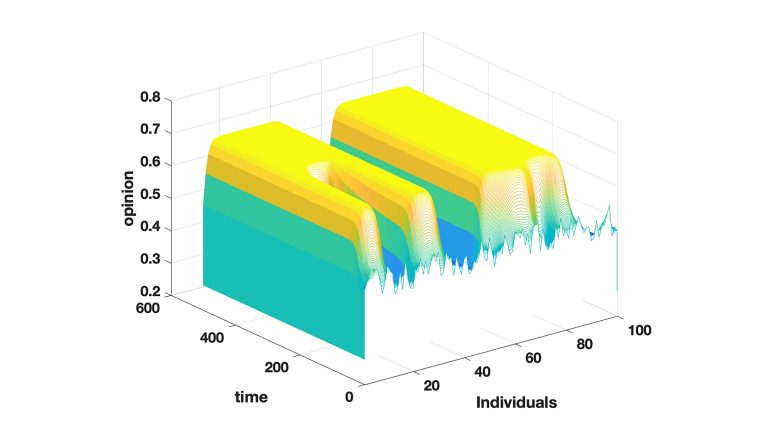 The height of the surface indicates the political opinion of each individual. In this simulation, each person is influenced by the views of their two closest neighbors, but those with extreme views are less likely to change their opinion.

Newswise — WASHINGTON, April 7, 2020 -- In recent years, chaos theory and other forms of computational modeling have sought to leverage findings in the social sciences to better describe -- and maybe one day predict -- how groups of people behave. One approach looks to update a widely used model to examine how changes in political opinions ripple through a group and how polarization can arise.

In this week’s Chaos, from AIP Publishing, researchers at the University of Edinburgh and the University of Central Florida use a theoretical model for how political opinions evolve in a population to examine what effect those with more extreme views have on making the entire system more polarized. The group’s network-based model extends a popular approach for studying opinion dynamics, called the Cobb model, and is based on the hypothesis that those with opinions farther from the middle of a political spectrum are also less influenced by others, a trait known to social scientists as “rigidity of the extreme.”

“We have laws to understand gravity or chemical kinetics, but people don’t always behave rationally, and the laws are much more difficult to pin down,” said author Desmond Higham. “So, it’s a fascinating but somewhat slippery area to try to work in. Anything that adds to our understanding with a simple model that captures behavior is worth pursuing.”

In the simplest version of the model, members of a society are arranged in a line, each of whom can sway the two on either side of them. Each simulated person is assigned a starting number between 0 and 1 that describes how strongly they initially aligned to either end of a hypothetical political spectrum.

“These kinds of effects occur in patches in society and can be difficult to identify,” said author Alexander Mantzaris. “They can evolve in segments that grow over time.”

The simulations produced periods of what the researchers called bistability, where most members of a simulated society chose two extreme, competing opinions. In simulations that randomly connected individuals, the pair found the potential for taking extreme sides happened more rapidly.

The researchers believe their work can help inform other work on networks outside of political opinion, such as understanding how wealth affects handling finances, how international policymakers influence each other and even how we affect each other’s music tastes.

They hope to expand the model by using new types of connectivity structures and to apply real-world data.