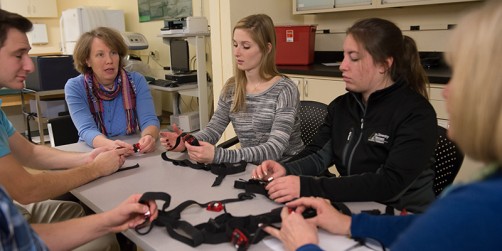 The study, based on an analysis of the 2015 National Health and Aging Trends Study, found that among the approximately eight million Medicare beneficiaries who received rehabilitation in 2015, 72 percent reported functional improvement following physical, occupational or speech-language therapy rehabilitation. Approximately 75 percent reported meeting their personal goals by discharge.

Overall, only 20 percent of older adults reported rehabilitation use in the past year. Use was 20 percent lower among Black non-Hispanics compared to White non-Hispanics and higher among those with more education. The article, “Rehabilitation Services Use and Patient Reported Outcomes Among Older Adults in the United States,” also shows that rehabilitation use was highest among seniors with chronic medical conditions, pain, history of falls and severe limitations in physical performance.

“Understanding rehabilitation services use is essential to plan for sufficient resources for the projected doubling of the older adult population, from 43.1 million in 2012 to an estimated 83.7 million by 2050,” writes study author Nancy Gell, assistant professor at the University of Vermont, who is also a physical therapist. “Loss or reduction in this benefit as currently provided by Medicare may result in worse health outcomes and more health care expenditures.”

Tom Price, Secretary of Health and Human Services – the department responsible for the administration of Medicare – has indicated that he might eliminate the program. “Nothing has had a greater negative effect on the delivery of health care than the federal government’s intrusion into medicine through Medicare,” said Price, a physician and former U.S. Representative from Georgia. “We will not rest until we make certain that government-run health care is ended."

Price has been less vocal on the issue as White House officials work to resurrect a Republican health care bill before the end of Trumps’ 100th day in office next week to replace the Affordable Care Act. Medicare is not expected to be dramativally effected by the new bill, but there are two provisions in the bill affecting the financing of Medicare, according to a recent article in the Washington Post.

Gell’s article in the Archives of Physical Medicine and Rehabilitation showed other positive results for Medicare recipients who utilize rehabilitation services, especially America's most elderly. Participants over the age of 90, as well as those with cognitive impairment or symptoms of anxiety and depression, reported functional improvement and goal attainment on par with comparator groups (i.e. younger age groups and those without cognitive impairment or depression and anxiety).

Results could also help older adults and their health care providers decide if rehabilitation could help them improve. “I think it’s easy to fall into the trap that says, ‘how much benefit can there be for the oldest old?’” says Gell. “This study shows that this group can benefit just as much as others. Importantly, patient-reported functional improvement and goal attainment did not vary by demographics or diagnoses."