Study: Polarization in Congress Is Worsening, and It Stifles Policy Innovation 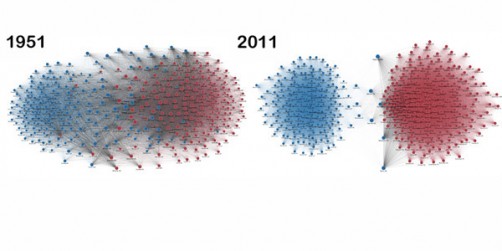 U.S. House of Representatives in 1951 and 2011. Republicans are in red, Democrats in blue. Nodes are members. Edges are a relative measure of bill voting cooperation.

Newswise — American politics has grown so polarized in recent years that there’s hardly any cooperation at all across the aisle, but the process that brought us here started long ago. Disagreements have been growing exponentially since the 1950s, according to a new quantitative analysis of the U.S. House of Representatives published in PLOS ONE. But the bigger fear, the authors say, is that as cooperation has declined, Congress’s ability to come up with new ideas to solve the nation’s problems has stagnated.

The project began when geographer Clio Andris, a former Santa Fe Institute postdoctoral fellow now at Pennsylvania State University, wondered whether the interwoven House districts created by gerrymandering might actually foster cooperation. After all, with some districts practically wrapped around each other, they ought to share some common interests. And where there are common interests, Andris reasoned, there ought to be cooperation.

“I found none,” says Andris who did the research while at the Santa Fe Institute. A particularly striking example of geographic disagreement comes from Illinois’s 17th district, she says, where during the 111th Congress (2009-2011) Democrat Phil Hare voted the same way as his neighbor from the 18th district, Republican Aaron Schock, 904 times, while he voted the same way as Mazie Hirono — who represented Hawaii’s 2nd district — 1,566 times. In other words, party, not geography, seemed to be the best indicator of whether two representatives would cooperate when a bill came to a vote.

But was it always this way? Working with Santa Fe Institute postdoctoral fellow Marcus Hamilton and collaborators from MIT and elsewhere, and examining more than five million pairs of members, Andris found that the period from 1949 until the early 1970s was marked by generally high levels of cross-party cooperation. That peaked during the 91st congress, during President Nixon’s first term in office, when members of opposing parties voted with each other nearly as often as members of the same party. By the middle of President Ronald Reagan’s first term, however, that kind of cooperation had started to crumble, and since 1983, the rate of cross-party cooperation has steadily declined, while same-party cooperation has kept going up.

The team’s analysis also revealed that as cooperation across the aisle has declined, so too has Congress’s ability to get anything done. Not only has the number of House bills that pass gone down, so too has the number of bills that are proposed in the first place. That means there are “fewer ideas being explored,” Hamilton says. “It seems to be that congressional innovation is suffering most because of partisanship.”

As a geographer, Andris says she’s most troubled by the loss of a once-rich political geography. “Geography is just zeros and ones,” she says—whether one lives in Seattle or Atlanta, it makes no difference politically.

“That’s a problem for me, because it dulls what’s great about this country.”

Read the paper, "The Rise of Partisanship and Super-Cooperators in the U.S. House of Representatives," in PLOS ONE