Survey: Majority of Americans say Muslims are more "Them" than "Us" 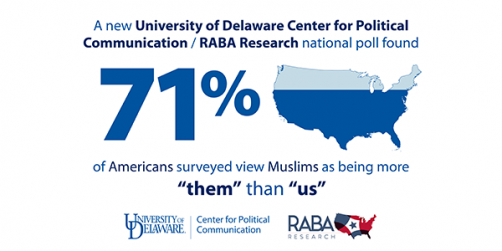 Newswise — A new University of Delaware Center for Political Communication/ RABA Research national poll found nearly three-fourths (71%) of Americans surveyed view Muslims as being more "them" than "us."

Additionally, 69% of those surveyed do not believe Muslims are part of mainstream society. The findings illustrate the divide on issues related to the religion of Islam and Muslims in America today.

The results underscore that there is confusion and lack of understanding when it comes to Muslims. Only 44% of those surveyed could say they personally “know” someone who is Muslim, and that 53% say they are “not familiar” with the religion of Islam.

Americans are also skeptical of several other major institutions, though most of the divides are not as dramatic. Most respondents say they distrust major institutions like the federal government (53%) and news media (53%). Even religious leaders scored a low 39% trust rating. Hollywood actors score the lowest, at 21%. In contrast, most respondents trust their neighbors (63%) and the military (68%).

Despite negative media coverage and protests of the Trump administration’s travel ban, 53% of respondents support such a ban.

In all, this survey suggests many Americans remain wary of Muslims and this suspicion reinforces support for policies like the Muslim ban. This nationwide survey is the first in a series designed to better understand the significant divides that are prevalent in the political landscape and national discourse.

Interviews of 725 voters were conducted September 23-24, 2017 via automated phone survey. The results were weighted to ensure proportional response. Margin of error for these results is +/- 3.6%. For questions on methodology, please email: info@rabaresearch.com or call (515) 491-2722.

The National Agenda Opinion Project research was funded by the University of Delaware’s Center for Political Communication (CPC). The study was supervised by the CPC’s Associate Director, Lindsay Hoffman (Associate Professor) and Paul Brewer (Professor) in the Departments of Communication and Political Science & International Relations.