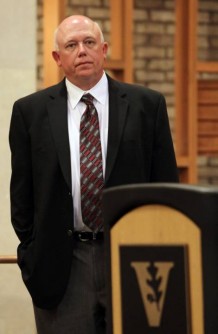 John Geer of Vanderbilt University on the Theater of the Bizarre second presidential debate.

The second debate between Hillary Clinton and Donald Trump was “a new low in American politics” that did not get Trump closer to the presidency, says Vanderbilt pundit John Geer.

“I think we saw a very desperate candidate act in some desperate ways,” said Geer, the Gertrude Conaway Vanderbilt Professor of Political Science. “We’ve never had a candidate say to the other candidate that if I become president, I’m going to try and put you in jail.”

The rhetoric shored up Trump with his hardcore base of voters, but in order to have a chance to win the election, he needs to grow that base from about 35 percent of voters up to 45 percent, at the minimum.

“I do think he locked down certain key parts of his base,” Geer said. “That is important to keep his campaign afloat, but it kind of guarantees a loss.”

Clinton was “not at her best” during the debate, Geer said.

“But if you look at it from a strategic point of view, she probably did OK,” he said. “She made no major errors.”

Geer said there was no precedent for what unfolded Oct. 9 in St. Louis.

“It was a theatre of the bizarre, the whole thing,” he said. “I’m sure there were some nasty debates in the 1800s, but at the presidential level since modern debates started with the Nixon-Kenney debates, there’s been nothing like it.”

[Media Note: Vanderbilt has a 24/7 HD TV and radio studio. Use of the studio with Vanderbilt experts is free, other than reserving fiber time.]