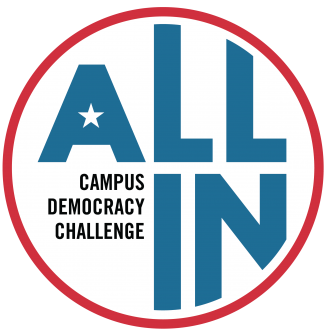 Newswise — The University of Illinois at Chicago is among a select group of winners at the first-ever ALL IN Campus Democracy Challenge awards ceremony to recognize colleges and universities committed to increasing voting rates among college students.

More than 30 awards were announced Thursday at the Newseum in Washington, D.C., where UIC received the national organization's Champion Award for being the "most engaged campus" and also earned a bronze seal for achieving a student voting rate between 50 and 59 percent.

"UIC is proud of the recognition and fortunate for the campus partners involved with our strategic civic engagement programming focused on developing lifelong active citizens," said Spencer Long, associate director of UIC's Center for Leadership and Civic Engagement. "The award is also a tribute to our students' desire to be civically and democratically engaged."

The nonpartisan program, which involves nearly 300 campuses and more than 4 million enrolled students combined, encourages higher education institutions to help students form the habits of active and informed citizenship, and make democratic participation a core value on their campus.

UIC was recognized for its coordinated efforts, which were led by a campus-wide civic engagement committee, focused on voter registration, education and turnout.

With the involvement of campus and community partners, UIC held special voter registration events around campus including early outreach at orientation. Overall, approximately 1,600 UIC students became newly registered in advance of the 2016 election.

A social media campaign, workshops, debate watch parties, town halls, Rock the Vote events, and a comprehensive nonpartisan voter guide to candidates at all levels were among the activities aimed at voter education and turnout.

The outreach elevated UIC's voter rate to 55 percent in 2016, up from 41.1 percent in 2012, which was one of the largest increases in voter participation among U.S. colleges and universities during the 2016 election according to Tufts University's National Study of Learning, Voting, and Engagement.

"UIC is not only ensuring that a more representative population participates in our nation's democracy, but is educating students to be civic-minded," said Zaneeta E. Daver, director of the ALL IN Campus Democracy Challenge. "They are an example to be emulated."

The ALL IN Campus Democracy Challenge was launched in 2016 and is a program of Civic Nation, a nonpartisan, nonprofit organization that uses organizing, engagement and public awareness to address some of the nation's most pressing challenges.

The award is UIC's second honor this year for its work in support of student voter engagement. In March, the university was named a Voter Friendly Campus by the Fair Elections Legal Network's Campus Vote Project and NASPA, the organization of student affairs administrators in higher education.