Political identity isn't intensified for those living as liberals in red states or conservative in blue states; instead, those people tend to lean the opposite direction on key policies 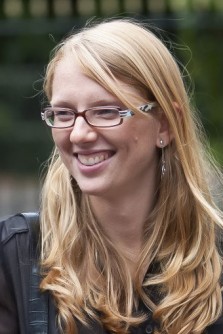 Newswise — A person’s political identity – for instance “strong conservative” or “moderate liberal” – means something different from place to place, according to a psychology researcher at The University of Alabama.

The correlational studies, “The Political Reference Point: How Geography Shapes Political Identity,” published Thursday in the scientific journal PLOS ONE.

In other words, she anticipated that it might take very strong left-leaning views before someone in Alabama – a historically red state – decides to identify as liberal. Results from the study, however, showed the opposite: for people who share the same political identity (e.g., “strong liberal”), those in in redder states tend to hold more right-leaning policy positions compared to those in bluer states.

“We think people are using a ‘political reference point’ … the idea is that when people figure out their political identity, they look at the people around them,” Tullett said. “Of course, deciding that you are relatively liberal requires you to hold less liberal policy positions in the South than it does in California.”

The study could potentially impact the methodology for political polling, which came under intense scrutiny after the 2016 Presidential Election.

“Anytime pollsters or scientists use somebody’s political identity as a proxy for their political views, there’s some information they’re missing,” Tullett said. “That identity is associated with different policy positions in a really red state vs. a really blue state.

“Also, because our country is so dichotomous in the way we treat political identity, people may exaggerate the differences between themselves and others by thinking that political categories tell you everything about people’s views on specific issues.”

Tullett, Feinberg and colleagues used a seven-point scale – moderate being the center point – to assess political identity. Co-author Zachary Mensch, a UA graduate student, researched voting histories of all counties in the 2012 election to define counties on a continuum from red to blue.

Participants were selected such that they equally represented red and blue counties, as well as each position on the political spectrum. Policy positions were assessed with 10 items, including five that are typically conservative – strong military, school prayer, capital punishment, offshore drilling and advanced interrogation techniques – and five that are typically liberal – women’s reproductive rights, same-sex marriage, social welfare, the Affordable Care Act and raising the minimum wage.

“Another thing we noticed is liberals tend to take stronger positions on the issues than conservatives,” Tullett said. “Also, some issues are more variable than others. For instance, people are pretty variable on capital punishment and school prayer, but when you get to an issue like a strong military, people’s views are more cohesive.”

In addition to policy positions, Tullett said that when examining voting intentions, moderates are more likely to say they will vote in line with the political majority in their respective state.