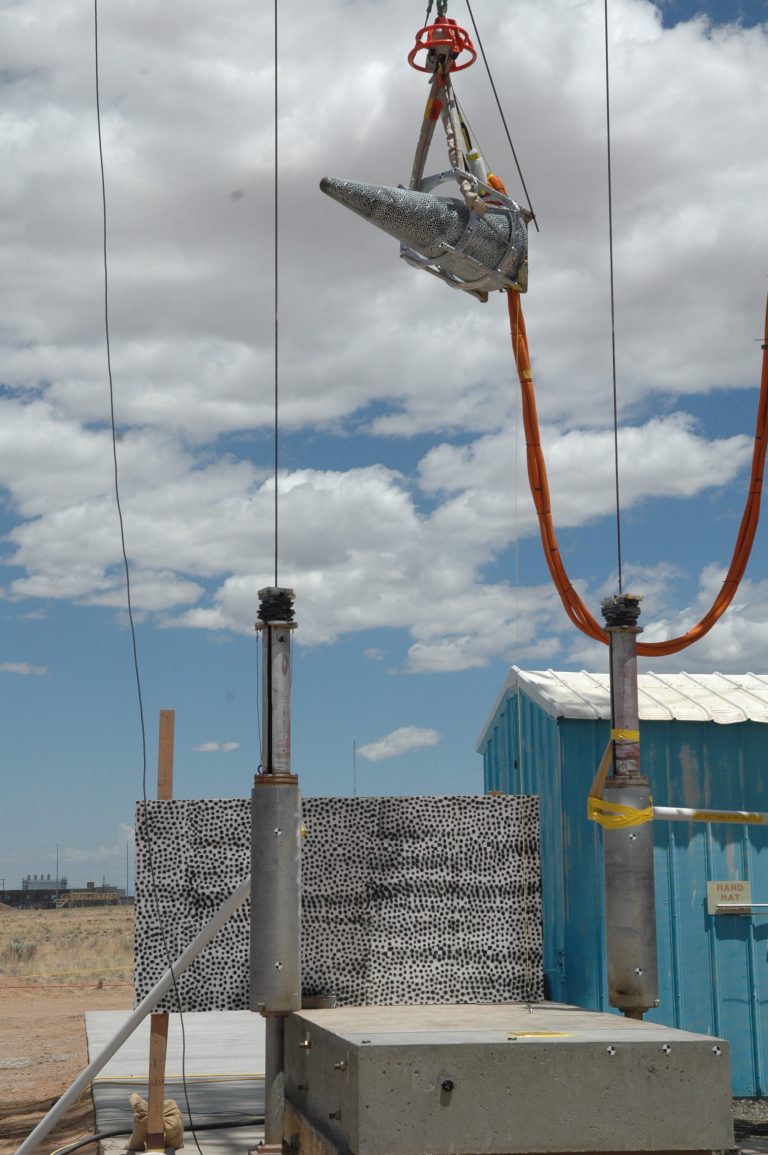 Sandia National Laboratories performed a drop test for the W88 Alt 370 system, designed to replicate a crane accidentally dropping the re-entry body onto a concrete surface. The test was conducted at Sandia’s 185-foot Drop Tower Facility, using the same handling gear a crane would use to move the weapon.

“The arming, fuzing and firing assembly is the brains of the warhead,” said Dolores Sanchez,  senior manager of the W88 Alteration 370 for Sandia. “It looks for the correct code and the correct environmental signals that will unlock the system, and it also ensures that it’s an authorized flight. In short, it makes sure it always works when we want it to and never when we don’t.”

The Kansas City National Security Campus completed production and shipped the first unit for the W88 Alt 370 arming, fuzing and firing, known as AF&F, assembly at the end of May, three days ahead of schedule. The first fully operable unit was received the next day at the Pantex Plant near Amarillo, Texas. That shipment was followed quickly by completion of the system-level first production unit for the W88 Alt 370 at Pantex in early July.

The W88 nuclear warhead entered the stockpile in late 1988 and is deployed on the Navy’s Trident II submarine-launched ballistic missile system onboard Ohio-class ballistic missile submarines. The weapon was beyond its original design life, and several updates were required to address aging issues and to maintain its current state of readiness. The W88 Alt 370 to modernize the warhead primarily included an updated AF&F assembly and a refresh of the conventional high explosive.

The AF&F assembly redesign was more than a decade in the making and included hundreds of people at Sandia working on more than a dozen major components that needed to be refreshed and requalified because of changes in technologies over the past three decades, said Jed Alderete, manager of the W88 Alt 370 AF&F assembly for Sandia. The assembly includes radar, communication, guidance and other key safety and security components.

“It speaks to the dedication of those involved throughout Sandia and the nuclear security enterprise for over a decade that the AF&F has been completed,” he said. “It is the major piece of the alteration, and it’s a huge accomplishment for all of Sandia.”

Reaching the first production milestone for the assembly means it underwent an extensive set of tests to ensure it always works when authorized and never otherwise. The full-system W88 Alt 370 went through similar rigorous testing to ensure its reliability and safety. The tests also ensure the AF&F assembly can be successfully integrated along with the W88 warhead into the full weapon system.

Impact, vibration, drops, extreme temperatures and massive electrical impulses are just some of the tests conducted to show the AF&F assembly will operate as intended.

The pairing of computational analysis and advanced computer algorithms with field testing data, including flight tests, combine to validate the AF&F design and its integration into the W88 Alt 370.

Under the guidance of the National Nuclear Security Administration, several national labs and plants have important roles in the program. Sandia and Los Alamos National Laboratory are the engineering and design labs for the W88 Alt 370. Sandia also manufactures integrated circuits and thermal batteries and serves as the technical integrator for the complete weapon, assuring that the system meets requirements as a whole and not just as individual parts.