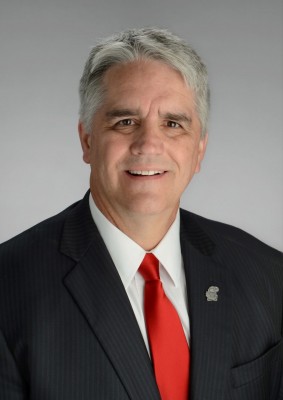 Roy Jensen, M.D., director of The University of Kansas Cancer Center, has been named president of the Association of American Cancer Institutes (AACI), an organization of 98 leading academic cancer centers in North America, which includes the 70 National

Dr. Roy Jensen, M.D., says the dramatic impact the pandemic has had on cancer patients across the nation. He says that because many screenings have been delayed.

A conversation about COVID-19: reflecting on first cases in Kansas

that advice sounds very similar to what we’re giving to the general public. I’m sure that one of the specific questions that cancer patient has is around their appointments and coming in to see the physicians.

The University of Kansas Cancer Center will receive an additional $5 million from the state budget for the KU Cancer Center Research Fund.
31-Mar-2020 05:15:24 PM EDT

"In addition to offering treatment, the new center will offer opportunities to continue research on proton therapy for new and expanded uses in the future,"

“Essentially, the infrastructure that you have to put in place to monitor that is not worth the bang for the buck,” said Dr. Roy Jensen, the director of the University of Kansas Cancer Center."

- Plan for work requirement is focus of Kansas Medicaid debate

“We have not seen any transmission of the virus to any of our healthcare workers. We have started a program of voluntary testing for COVID among our faculty and staff to assure our patients that our workforce is safe, and this is a safe environment.”

“African American populations, Hispanic populations, folks in lower socioeconomic status and high levels of chronic disease were significantly greater impacted by this virus than other groups.”