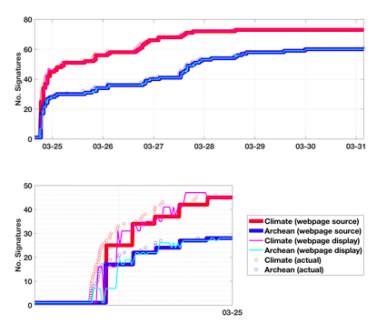 Graphs depicting how signatures are recorded on the government website – the lower graph shows in detail the actual signature numbers versus what was reported by the site.

Newswise — A recent study conducted by researchers at Boise State University shows delays and discrepancies in the number of signatures recorded on White House petitions drafted and signed by American citizens. This has potential ramifications for the success of citizen-drive petitions to the White House, as well as contributing to individuals’ perception that their First Amendment rights are being compromised.

In 2011, President Barack Obama’s administration created the “We the People” petition website to make petitioning the White House more simple and direct for American citizens. The website can be found here: petitions.whitehouse.gov

During the debut of President Donald Trump’s administration, all existing petitions were archived and the petition website was refreshed. However, many observers – including Boise State researchers Utych, Dylan Mikesell and Matt Kohn – noticed that signatures on these petitions did not seem to be recording properly. Signature numbers were shown at levels lower than those known to individuals, or shared on social media. In particular, researchers noted that a petition related to climate change appeared to have many fewer recorded signatures than expected, based on individuals known to the authors who had signed the petition. Considering that the official White House climate change web page was removed after President Trump’s inauguration, there may have been a sense that this petition’s politicized content was being manipulated.

Macon Phillips, who oversaw the creation of the We the People page for President Obama’s administration, believed that it was an issue with caching the signatures, rather than an effort to minimize signatures on petitions, a claim supported by an anonymous official in President Trump’s administration.

Utych, Mikesell and Kohn decided to test this theory. The Boise State team created two petitions on We the People, one addressing climate change and another related to the benign topic of Archean geology.

“This allowed us to examine whether politicized content of the petition was simply related to issues with signature recording,” explained Mikesell.

A group of anonymous volunteers then signed the petitions beginning March 24, 2017, and recorded the number of signatures on these petitions every minute using the API made available by the government website. Additionally, the Boise State team logged screenshots every five minutes on each petition website to verify what petition viewers were seeing.

“The oscillations in signatures could give the impression that signatures are not being registered correctly – for instance, someone might sign a petition, then think that the number of signatures has actually decreased,” said Kohn. “Consequently, some petition signers may lose faith in the petition website and feel their First Amendment rights are being compromised.”