Book Reveals Why Support of U.S. Global War on Terror Has Been Lukewarm 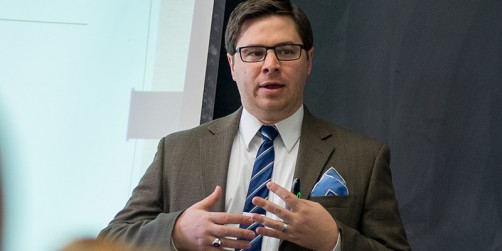 Peter Henne, assistant professor in political science at the University of Vermont, brings a broad range of experience to his first book including work at the Pew Research Center, the National Consortium for Terrorism and Responses to Terrorism, and as a consultant with the US government.

Newswise — If President Donald Trump’s administration plans to pressure Muslim states into supporting the U.S. Global War on Terror, they would be wise to consider the findings in a new book showing showing historically weaker counterterrorism support from countries where the religion-state balance leans toward the former.

Middle East expert Peter Henne, assistant professor of political science at the University of Vermont, wrote Islamic Politics, Muslim States and Counterterrorism Tensions (Cambridge University Press) to reveal why support for the U.S. Global War on Terror from Muslim states has ranged from full cooperation, to minimal support to somewhere in between.

Henne, a former researcher at the Pew Research Center, found that Muslim states with stronger religion-state ties had a consistently negative effect on counterterrorism cooperation, even when a variety of alternate explanations and variables were taken into consideration.

“I argue in the book that Islamic politics did affect Muslim states, but in a specific manner: through the differing arrangements between religion and state in these countries,” says Henne, who relied on an original dataset based on religion-state ties and counterterrorism collaboration. “I also argue that close ties between religion and state intensify the salience of religious issues, strengthen religious groups, and make regimes more likely to follow religious contention when formulating policies.”

Henne notes that within a number of Muslim states it has been a decades-long domestic struggle to determine the proper relationship between Islam and politics. “Discrete U.S. policies are unlikely to change this,” Henne says, “and the United States may need to choose between investing in complex, long-term efforts or scaling back its ambitions for the region.”

Henne’s case studies of Pakistan, the United Arab Emirates and Turkey, as well as an analysis of the Arab Spring and rise of the Islamic State (IS), also offer new insight into current events in the Middle East.

Insight Into the Arab Spring

In regard to Arab Spring, the professor notes differing responses in whether governments saw the uprisings as threat or opportunity.

“States with closer ties to Islam saw an opportunity to support the rise of like-minded regimes in the region, as seen in Saudi Arabia’s support for anti-Assad rebels and Qatar’s backing of Islamic opposition groups in numerous states,” says Henne.

Henne’s findings also provide clues into the likely path Turkey will take as its political system changes under President Erdogan, who is rolling back democratic openings in Turkey, and is also increasing the role of Islam in its politics. “While he is not Islamizing the country as some of his critics fear,” writes Henne. “His policies are narrowing the officially-maintained distance between Islam and the state established by Ataturk.”

Previously, Turkey’s counterterrorism cooperation with the United States were due to institutionalized distance between religion and state that insulated the Turkish regime from Islamic opposition to U.S. efforts," says Henne. “As this distance is altered, tensions with the United States will likely increase, not because Turkey is become more radical, but because the institutional arrangement that supported closer ties is changing.”