Canada’s Election: What to Watch 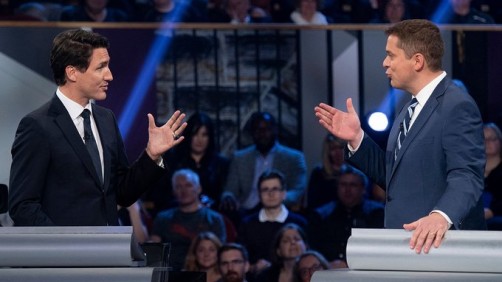 Newswise — Canadians will vote in the country’s federal election on October 21 to evaluate Prime Minister Justin Trudeau’s four years in office. With polls showing a tight race between Trudeau’s Liberal Party and the Conservative Party, the results could produce subtle shifts in Canada’s foreign policy, especially on climate change, and its relationship with the United States.

The primary opposition to Trudeau and the Liberal Party comes from the Conservative Party’s candidate, forty-year-old Andrew Scheer. The youngest candidate to run for Conservative leader, he has been highly critical of Trudeau’s government and has promised to scrap policies on climate change and gun control.

With both the Liberals and the Conservatives polling below 30 percent, either party could face the challenge of forming a minority government. Trudeau’s Liberal Party would likely form a coalition with the left-leaning New Democratic Party, which is currently polling in third. It is unclear which parties the Conservatives would work with.

What are the prospects for Trudeau and the Liberal Party staying in power?

Winning by a wide margin four years ago, Trudeau was touted by party supporters as a progressive change agent after nine years of conservative governments. This year, Trudeau’s candidacy has been overshadowed by a government scandal involving possible interference in the justice system, as well as revelations of Trudeau wearing blackface more than a decade ago. The government’s approval of the Trans Mountain oil pipeline in Alberta has also reportedly cost it the support of some on the left.

Trudeau still draws some backing thanks to the strong economy. Under his government, Canada’s gross domestic product (GDP) has grown 8 percent since 2015, and the unemployment rate reached a nearly four-decade low at 5.5 percent this year.

Where do the candidates stand on foreign policy issues?

Foreign policy has mostly been sidelined on the campaign trail, though Trudeau has had to navigate some high-profile diplomatic tensions. Last year, for example, Canadian authorities arrested a top executive of the Chinese tech giant Huawei on a U.S. warrant, prompting an angry response from China, which has held two Canadian citizens on espionage charges. Canada also publicly criticized Saudi Arabia for its detention of human rights activists, causing both countries to recall their ambassadors. Additionally, trade disagreements linger with the United States.

Trudeau’s foreign policy agenda has focused on trade, climate change, and women’s rights. In the trade arena, he negotiated a deal known as the U.S.-Mexico-Canada Agreement (USMCA) to replace the North American Free Trade Agreement (NAFTA), and the Comprehensive and Progressive Agreement for Trans-Pacific Partnership (CPTPP), the successor to the Trans-Pacific Partnership, which U.S. President Donald J. Trump withdrew from. On other issues, Trudeau’s government granted asylum to more than twenty-five thousand Syrian refugees and committed funding to global programs that promote sexual and reproductive rights.

Trudeau’s challenger Scheer considers the prime minister’s foreign policy as one of symbolism rather than substance. He has characterized Trudeau’s responses to China as weak and criticized the USMCA, which he described as worse than the original NAFTA for autoworkers and dairy farmers, who would face quotas and export restrictions. Scheer has adopted a stance similar to Trump on some issues, vowing to cut foreign aid, sanction Iran, and recognize Jerusalem as Israel’s capital. He has also proposed to increase military cooperation with the United States by joining its ballistic missile defense program.

What’s at stake in U.S. relations?

With the United States as Canada’s top trading partner and neighbor, both the Liberal and Conservative candidates hope to maintain and strengthen the relationship. For Trudeau, the challenge would be balancing the Canada-U.S. relationship with his efforts on climate change and multilateralism that diverge from the Trump administration’s policies. The two leaders have traded barbs, with Trump once calling Trudeau “very dishonest and weak” following the Group of Seven summit hosted by Canada in 2018. Even though he has since reconciled with Trump, Trudeau recently told voters he would continue “standing up to Donald Trump and the forces of populism and chaos around the world” if reelected.

Scheer, on the other hand, has blamed rising protectionism, including some of Trump’s trade tactics, for acting as a drag on the Canadian economy. Scheer says he considers dealing with Trump an “interesting challenge,” and that he will work with individuals in the U.S. Congress and others outside of the Trump administration to keep the two countries close. He has also suggested that Canada should take more of a leadership position on the world stage, and he recognized China, Russia, and Iran as primary threats, a view that could resonate with Trump.