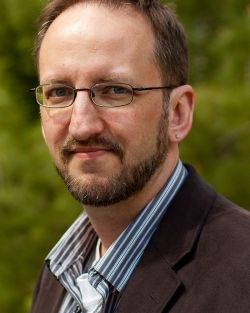 Biography :
Robert Heverly is an associate professor of law at Albany Law School, having joined Albany Law School’s faculty in 2010. Robert formerly taught at Michigan State University College of Law after serving as a faculty member and the director of the Masters in Law (LL.M.) in Information, Technology and Intellectual Property at the University of East Anglia in Norwich, England. Prior to moving to England, Robert was a Resident Fellow with the Information Society Project at Yale Law School. Robert was also on the staff at the Government Law Center of Albany Law School in the 1990s, and returned to direct the Center on an interim basis after he returned to Albany Law as a faculty member. Robert researches and writes in areas at the intersection of technology, law and society, including drones, robots, AI, and human augmentation.

He teaches classes in Torts, cyberspace law, copyright law, and unmanned aerial vehicles, among others. He has published articles and book chapters on drones, intellectual property, and the internet, and his article on liability of compromised system owners in denial of service attacks was published in 2020 in the Florida State University Law Review. Robert has held the position of Chair of the American Association of Law Schools’ Internet and Computer Law Section, is a member of the American Bar Association and the New York State Bar Association, and was the Reporter for the Uniform Law Commission’s “Uniform Tort Law Relating to Drones Act.” He holds a J.D. from Albany Law School, an LL.M. from Yale Law School and remains an Affiliated Fellow with the Information Society Project at Yale Law School.