Election 2018: More Women Than Ever Are Running for Office

Political science faculty across the CSU say it's an exciting time for women in politics, but there's still plenty to do to achieve gender balance in federal, state, and local government. 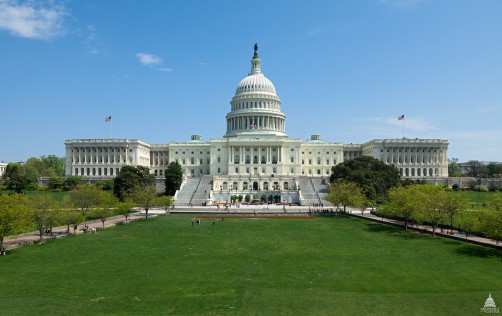 Photo courtesy of the Architect of the Capitol

​Across the country, scores of women are running for office in 2018 elections -- a movement that could irrevocably shift the political landscape of the U.S. Currently, just 19.6 percent of Congressional seats are held by women.

Newswise — Across the country, scores of women are running for office in 2018 elections — a movement that could irrevocably shift the political landscape of the U.S. Currently, just 19.6 percent of Congressional seats are held by women. Photo courtesy of the Architect of the Capitol

A record number of women are running for the House, Senate and state government in the November 2018 election, and many more have shown interest in future elections.

The Center for American Women in Politics estimates that so far 575 women have declared their intention to run for Congress or a gubernatorial seat in the fall, and those numbers don't include state legislature candidates.

For political scientists like Ivy Cargile, Ph.D., assistant professor at CSU Bakersfield, this is an exciting time for women in politics. "We haven't seen these kinds of numbers since 1992, after the Clarence Thomas and Anita Hill hearings," says Dr. Cargile, referring to the widely publicized sexual harassment case against the then-Supreme Court Justice nominee.

The lack of female representation on the 1991 hearing's judicial committee angered many women, spurring them to run for office, says Cargile.

More than two decades later, a unique confluence of factors — including the outcome of the 2016 presidential election and the rise of the #MeToo movement — has had a catalyzing effect on many women. "For the first time since researchers have been measuring political attentiveness, women are reporting a higher level of political interest than men," says Lisa Bryant, Ph.D., assistant professor of political science at Fresno State.

"That means women are paying attention, women are demanding action, and women are running for office themselves."

Diana Dwyre, Ph.D., professor of political science at CSU Chico, adds that the trailblazing candidacy of Hillary Clinton inspired many, and "Bernie Sanders [also] mobilized the left wing of the Democratic Party, including many women."

"More and more women have been running in recent years, but 2016 really was a turning point," she says.

A Long Way to Go

While more women are getting involved, both federal and state governments are still far from balanced when it comes to female representation. A few states are getting closer, though: Both Vermont and Arizona now have legislatures that are 40 percent women.

And in 2017, Virginia made history by electing the first two Latinas to the Virginia House of Delegates, Cargile points out.

While female university presidents may be a majority at CSU campuses, the trend is not reflected in California's government, where only 22.5 percent of the Senate and Assembly are women.

​And the Golden State has yet to elect a female governor. "We don't have as many women [in the California Legislature] as we once did… I think these numbers are going to change come November 2018," Cargile says, adding that some soon-to-be open seats will give women a better chance than facing an incumbent challenger.

Another point to consider is that "women in politics" is a very broad category. It doesn't speak to the diversity of viewpoints among female candidates. Cargile cautions that "women are not a monolith. They are not one group that thinks the same way… particularly when it comes to the issue of party identification."

Standing in Our Own Way?

"A common misconception that women have is they think they are not qualified to run for office," Dr. Bryant says. "Women tend to underestimate their own knowledge and think that they need more experience, more expertise, more everything before running."

So it's a challenge simply to encourage them to take a leap in the first place. "Research shows that women have to be asked to run two to three times more than men before they consider running for office," Bryant says.

One reason for women's reluctance could have to do with time. "All candidates tend to underestimate how running for office will take over one's life," Dwyre says, and "women often face additional scheduling challenges if they have children, something male candidates are less inclined to face."

Sometimes a little encouragement from the right person — a political recruiter such as a party leader or elected official — makes all the difference, explains Meredith Conroy, Ph.D., assistant professor of political science at CSU San Bernardino.

"Encouragement from recruiters is important for both men and women," Dr. Conroy says, citing a 2012 report. It found that 67 percent of respondents who were encouraged to run for office by someone in politics considered running.

"But amongst individuals who were not encouraged to run, only 33 percent reported that they had considered running for office," Conroy adds.

"Recruitment is especially vital for women," she adds, noting another study in which 24 percent of women reported encouragement from a recruiter as the single most important factor in their decision to run, compared to 15 percent of men.

Women may also be apprehensive about the costs of running a campaign, but you don't have to be wealthy to launch one, says Bryant. "Statewide and federal campaigns are expensive, but almost all start with door-to-door canvassing and a small group of people working out of a dining room." And many local campaigns are not as costly as some might think, she adds.

Still, networks are key. "Research has shown that women often have a more difficult time raising the money to run than men in part because they tend to have narrower networks from which to draw. Yet, this is definitely changing," says Dwyre.

There are a number of organizations that help women run for office with a range of support and training, from campaign management to public speaking to fundraising how-to. They may even offer workshops to help candidates learn to handle public scrutiny and negative social media — challenges many newcomers may not be prepared for, Cargile says.

While women were granted the right to vote in 1920 with the ratification of the 19th Amendment, it wasn't until the Voting Rights Act of 1965 that cultural and social barriers began to crumble — but mostly for white women, Cargile explains.

"1965 to now is not a very long time, historically speaking," she says. "So when we think about the intersection of gender, race and ethnicity, [black, Latina and Asian women] are fairly new groups to come on to the political scene. They definitely don't have the experience as a group that white males have who have been at this game since 1789. So a lot of learning has to happen."

A natural first step: simply getting involved with a local political party, Bryant says. "Parties are the backbone of our political system and can help candidates increase their network and offer support."

"Higher education can and should encourage young women to be active on their college campuses and run for elected positions on campus," says Dr. Lisa Bryant of Fresno State. Experience in Associated Students, Inc. (ASI) or as a student representative on college boards or committees helps teach many of the skills necessary to run for public office, she says, including public speaking and participation in conferences and forums.

Beyond campus, Dr. Meredith Conroy of CSU San Bernardino would like to see educators and career center staff connect with local public officials to find opportunities for students to intern in political offices. "Once students are exposed to politics in practice, they may be less skeptical of their own abilities, and political office may seem more realistic as a career path," she says.

"One reason that women are underrepresented in government is because they do not see themselves as qualified; this is not the same for men," continues Conroy.

This discrepancy between men and women emerges early. "By high school, and through college, young women are less likely to believe they are qualified to run for office than young men. So we as educators need to work to eliminate that qualification gap."

The classroom may be where a young woman first starts to think about a role in politics, notes Cargile, who loves to engage her students in conversations around race and gender. Faculty across the CSU are working to empower students on these issues, she says, from symposia and panel discussions to guest lecturing and research presentations.

Visit the Cal State Student Association (CSSA) to learn more and get involved with other CSU students who are helping to shape higher education policy in California.​

14 Organizations That Help Her Run

CSU experts on women in politics name a variety of groups, both partisan and nonpartisan, state-based and national, that work to get more women elected. And this kind of support is not a new thing — many of these groups have been around for decades.

IGNITE Founded in 2010. Nonpartisan organization offering programs for high school and college-age women to actively engage in the political process.

Latino Victory Project Founded in 2014. Raises awareness and engagement to increase representation of Latinos at all levels of government.

National Federation of Republican Women Founded in 1938. Teaches women how to campaign through their Campaign Management School.

Ready to Run Founded in 1998. Nonpartisan campaign training program for women from the Center for American Women and Politics.

She Should Run Founded in 2011. Nonpartisan organization that provides a starting point for women interested in running for elected office.

The National Women's Political Caucus Founded in 1971. Supports pro-choice women and offers training on fundraising and other campaign activities.

The Women's Campaign Fund Founded in 1974. Nonpartisan group that helps women with expertise, training and funding.

Victory Institute Founded in 1993. Works to increase the number of LGBTQ people in public office and to provide programs and support.

VoteRunLead Founded in 2014. Campaign training and leadership program for women.