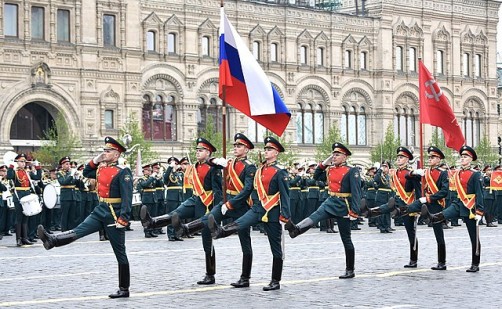 WASHINGTON (May 5, 2022)—May 9 is Victory Day in Russia, a national holiday that marks the victory over Germany in World War II, usually celebrated with a military parade in Red Square. With Russia’s war against Ukraine still raging, this year’s celebration will be closely watched to see if Putin will leverage the symbolic significance and propaganda value of the day to announce either a military achievement in Ukraine, or a major escalation of hostilities.

Marlene Laruelle is the Director for the Institute for European, Russian, and Eurasian Studies of the Elliott School of International Affairs.

Ahead of Russia’s May 9 celebration Laruelle offered this historical analysis:

Putin's Russia made Victory Day a cornerstone of the regime and its popular support. May 9 (as it is celebrated in the Russian calendar) is the main national holiday in Russia, a genuinely popular one, when all generations and social classes share mourning and remembrance for the 27 million citizens who died, but also pride for the 1945 victory. With the war raging on in Ukraine, May 9, 2022 will be a key date for the Russian regime to showcase some forms of victory or at least success, as it has built its military invasion of Ukraine based on the preposterous notion of the need to "de-nazify" Ukraine. Many observers have expressed concerns of the risks of an escalation, either in rhetoric or in action, of the Kremlin to be sure May 9 this year remains in the collective memories as a turning point in the war.