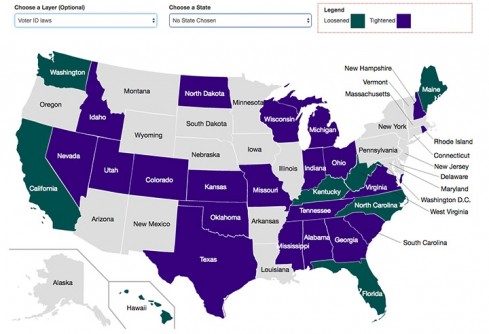 Newswise — Even for the most ardent political followers, it can be difficult to track changes to state voting laws. Which states allow for early voting? Which states have tightened their voter ID laws in recent years? Which states allow online voting? These are all critically important questions, especially in an election year.

So how does someone easily navigate individual state voting laws? Enter the enterprising students in Richter Professor of Political Science Carol Nackenoff's American Elections class, who have created an interactive map that compresses the myriad changes to and differences in state voting laws into a single, easy-to-use tool.

Users have two options to get a better sense of state voting laws. The first involves selecting one of 16 layers – 13 of which represent a different voting law – to see a color-coded breakdown of how the laws have changed or have not changed across the nation since 2006. For an example, selecting the “Same Day Voting Registration” layer reveals that states such as Montana and Illinois have made it is easier since 2006, while states such as Wisconsin and Idaho have made it more difficult.

The second option allows users to click on a specific state for an in-depth report on its elections laws. The reports vary slightly state to state, but often include a detailed history of that state’s voting laws, a breakdown of specific rulings that have altered the laws in the past decade, and where the state’s election laws stand in the broader context of the nation.

“The goal is to provide a big picture view of voting laws across the country,” says Nackenoff. "Students get an in-depth sense of what has been changing and can see how the story in their state tends to follow - or not follow - what is going on in other states," says Nackenoff. "Students and users can see the patterns of change – including the fact that we are in an era of restricting access to the franchise – and the relationships between legislative, executive, and judicial action.”

To learn more about this project or to speak with Professor Nackenoff, please contact Mark Anskis at [email protected] or 610-328-8271.