Speaking at a Wellesley College event, Susan Rice, ambassador and foreign policy adviser, said the U.S. needs to be prepared for months, if not years, of further retaliation. 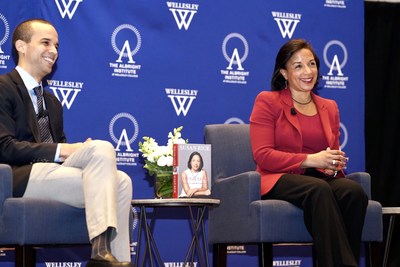 Ambassador Susan Rice joins Wellesley College professor Michael Jeffries on stage at an event on Wellesley's campus where the two discussed Rice's recent book, her work in the Obama Administration, and current events in the news like the Iran crisis.

Newswise — WELLESLEY, MASS. Jan. 9, 2020 – At an event at Wellesley College, Ambassador Susan Rice shed light on the current Iran crisis, saying that the Iranians were sending the U.S. a very powerful message with their retaliatory strikes on a military base in Iraq.

“My assessment is that the Iranians not only chose to target those missiles in a way that was going to minimize the risk of casualties—hitting hangars, not barracks for example—but they also warned us … You may think, ‘That is good, a bullet dodged. We got Gen. Qassim Suleimani and they got hangars; that is a good deal.’ If you think that, you do not know Iran.” Rice said.

“You heard President Trump say yesterday, ‘Iran will not get a nuclear weapon on my watch.’ They wouldn’t have got one on his watch if he had kept the deal in place. Now, he faces a tough choice,” Rice continued. “Iran has by some estimates maybe 10 months to [have enough material for a nuclear weapon]. And 10 months from now is guess when? We are less safe, we have lost a lot of strategic ground in the region.”

In conversation with Wellesley American studies professor Michael Jeffries, Rice also discussed her new memoir, Tough Love: My Story of the Things Worth Fighting For, as well as her family, upbringing, challenges she faced early in her career, and her time in the Obama administration.

The event was part of a series marking the 10th anniversary of the Madeleine Korbel Albright Institute for Global Affairs and its Wintersession program at Wellesley, founded by former Secretary of State Madeleine Albright, a 1959 graduate of the College.

“Since its founding, the Albright Institute has sought to address many of the most pressing global issues of our time, and to do so with a multidisciplinary approach. Central to its mission—and indeed, the College’s mission—is the belief that the surest way to bring positive change to our fast-moving, complex world is through advancing women’s leadership,” said Wellesley College President Paula A. Johnson in her introduction. “How fitting, then, and what a privilege it is, to welcome one of our nation’s most distinguished public servants to campus.”

Annually, 40 Wellesley students from across majors and disciplines are chosen to participate in the Albright Institute’s three-week Wintersession program and a global internship later in the year. Over Wintersession, Fellows attend lectures about global issues and work in multidisciplinary groups on projects, which this year they will present before Secretary Albright.