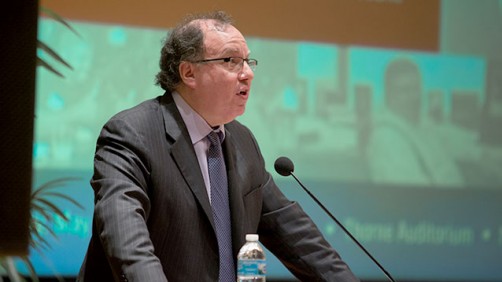 Daniel B. Rodriguez, dean of Northwestern Pritzker School of Law

Professors Eugene Kontorovich, Andrew Koppelman and Deborah Tuerkheimer cover a wide array of topics, including Trump’s nomination of Judge Neil Gorsuch, his expansion of executive power and the potential of the Department of Justice shifting away from certain civil rights issues.

They conclude with a lightning round that touches on topics including climate change, affirmative action and power the president holds and doesn’t hold over foreign treaties.

“The question about (Neil) Gorsuch is really a question about the departures of normal procedures -- in the case of Merrick Garland where for nearly a year Republicans refused to so much as hold a hearing... If the Democrats hold together and continue to block Gorsuch, then I think the Republicans will certainly use the nuclear option because they want to fill that seat, which as a constitutional matter, I think is appropriate.”
-- Andrew Koppelman, John Paul Stevens Professor of Law

On the role of the new Department of Justice

“It’s going to look very different from the Department of Justice that we’re used to. Jeff Sessions, by all appearances, is not interested in promoting civil rights, which is a fundamental component of what the Department of Justice is supposed to be doing. He has sort of indicated that LGBTQ rights are not a priority for him. He’s indicated that women aren’t discriminated against in ways that he recognizes as actionable. We can expect that hate crimes will not be aggressively prosecuted. We can expect again pull back on statements that the Obama administration made about the importance of trans (transgender) rights...We can expect that criminal justice reform will be set back.”
-- Deborah Tuerkheimer, Professor of Law

On claim that President Trump is violating emoluments clause

“I think it’s very clear what a court would be likely to do about a claim of violation of the emoluments clause and indeed such a claim has been filed… I think a court would be extremely likely to say that it presents a non-justiciable question, that is to say the plaintiffs do not have standing to raise this. The Constitution requires the court to adjudicate cases, which are disputes between people -- in other words something is being done to someone. It’s not clear that Trump is receiving any alleged emoluments against somebody.”
-- Eugene Kontorovich, Professor of Law

About the podcast series

Other topics of the Planet Lex podcast series follow: Defending Brendan Dassey, the evolution of music copyright law, sexual misconduct on campus, the regulation of public corruption, technological advancements and the law, law enforcement and implicit bias, and integrating the law and STEM-focused multidisciplinary education. Listen to all nine episodes.