Media, Politics, and Democracy: In the Election Season 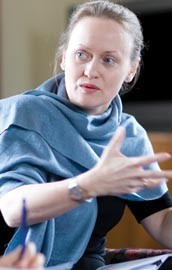 Newswise — Professor Eleanor Townsley, an expert on the role and influence of media opinion expressed on television and radio shows and in print, recently wrote The Space of Opinion, Media, Intellectuals and the Public Sphere (co-authored with Ron Jacobs, Oxford, 2011). Looking at the growing influence and partisanship of opinion formats in political journalism, she argues these formats are not necessarily bad for democracy.

Analyzing large samples of newspaper and television opinion from the Clinton and Bush administrations, Townsley reveals an increase in the number of opinion formats and an increased willingness of these formats to align with partisan ideals.

Cable opinion programs are strongly identified with Fox News and conservative figures like Sean Hannity and Bill O’Reilly who wield a lot of influence in the public conversation, especially in election seasons.

“There is reason for concern here” Townsley says, “because these opinion genres can be polarizing, uncivil, and reductive.”

But these are not new features of American media, Townsley emphasizes.

“Opinion formats date back to the origins of modern American journalism. They pull together different elements from a long history of opinion shows that actually originated on PBS like Agronsky and Company, The McLaughlin Group, and Buckley’s Firing Line.

These new formats are not only conservative. The Comedy Central shows and the liberal formats on MSNBC vie with conservative formats to define the issues of the day.

What is new is the innovative political influence of these shows, Townsley says.

“These formats have pioneered a very effective form of critique that can challenge the authority of other journalists and politicians. On the one hand, they deny the authority of traditional media by challenging its claims to objectivity and neutrality. One the other hand, they refine a pure partisan position as a standard against which all politicians are measured, despite the fact that elected officials and others in politics must compromise to govern.”

Are these opinion shows bad for democracy? Not necessarily Townsley answers.

“Shows like Hannity’s and O’Reilly’s engage audiences that may not otherwise participate in politics. They offer highly authentic performances that speak to people’s values and touch their emotions. This encourages many to join in the public conversation who otherwise wouldn’t.”

The rise of opinion media can produce greater media literacy too, Townsley suggests.

“These shows alert people to media bias, and if more people realize that information comes from a perspective, then that is probably good for democracy.”

An interview with Townsley can be seen here. (http://www.mtholyoke.edu/news/channels/36/stories/5683180)

The Space of opinion, Media, Intellectuals and the Public Sphere (2011)