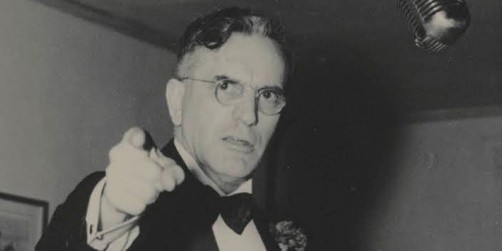 Professor Garrison Nelson spent decades researching and writing the only biography on the 44th U.S. Speaker of the House.

Newswise — In early 20th century Boston, the path to political power required one of two backgrounds: Yankee Boston or Irish Boston. The former demanded a Pilgrim or Puritan ancestor and a degree from Harvard. The latter called for an Irish-born father, a widowed mother and younger siblings that you helped raise in poverty.

John W. McCormack, the 44th U.S. Speaker of the House from 1962-70, possessed neither of the Yankee requirements, and had no Irish ancestry. He did, however, grow up in extreme poverty in South Boston, and used that as a basis to fabricate his personal history when he ran for the Massachusetts House in 1920.The false narrative of the Irish kid from Southie propelled McCormack to a historic 43-year career in the U.S. House (1928-1971) and within a heartbeat of the presidency. Somehow, it remained intact until April of 2017 when the first biography on McCormack was written by Garrison Nelson, the Elliott A. Brown Professor of Law, Politics, and Political Behavior at the University of Vermont.

Some 50 years in the making, John William McCormack: A Political Biography reveals stunning new facts about the background of a man considered the legislative architect of the New Deal and the Great Society. Nelson gives long overdue credit to a leading figure in the transformation of the 20th Century Democratic Party for passing a social welfare agenda that included Social Security, Medicare and Medicaid, immigration reform and civil rights legislation.

The reinvention of John McCormack

The most politically disqualifying discovery by Nelson was that McCormack’s father wasn't Irish. He was a Canadian-born Scot who abandoned John and his younger – and older – siblings, and outlived his Boston-born wife. Nelson uncovered forgotten FBI files, falsified birth and death records, taped interviews with McCormack, and conducted his own interviews with family, friends and even cemetery caretakers as he chased clues from Ireland to Canada and across the U.S.

Previous attempts to write biographies on McCormack – the only post-1940 Speaker of the House without a biography until now – usually ended with the discovery of sanitized congressional papers located at Boston University void of any pertinent personal information. Nelson was told early on by a political boss in Southie not to expect anyone to talk about their local hero and violate a code that says, “never write what you can speak; never speak what you can nod.”

“I kept waiting for someone to write the book, but no one ever did,” says Nelson, who spent over $100,000 of his own money to complete the book about a man referred to by his longtime administrative assistant as “the most secretive man I ever met.” “I couldn’t understand why he was the only Speaker without a biography until I started digging around,” says Nelson.

Nelson caught a break when McCormack’s dying nephew gave him six boxes filled with family photographs, personal letters, news clippings and gavels. “It was there that I found documents and letters that unlocked John McCormack’s hidden past and the successful reinvention of his family history that allowed him to ascend politically to the Speakership of the House and just one heartbeat away form the presidency between November 1963 and January 1965.”

Nelson traces his near-obsession with McCormack to an unexpected meeting with the Speaker in 1968 after stopping by his office to see if he'd answer some questions for his doctoral dissertation. “It was a wonderful hour for this 26-year-old new college instructor to enjoy a cigar with the 76-year-old House Speaker in the U.S. Capitol,” recalls Nelson, who had just been hired by UVM earlier that year. “This remarkable experience was the inspiration for this particular book as well as for most of my published research on the U.S. Congress.”

Nelson chooses not to harp on McCormack’s falsified past in his 910-page book, referred to by David Shribman of the Boston Globe as “a brilliant portrait not only of 'Boston’s Forgotten Man,' but also of the place that spawned him and of the era he occupied.” Instead, he gives McCormack long-overdue credit for forging key political alliances, allowing his party to pass legislation to help the nation’s most vulnerable.

Known as “Boston Brahmin’s favorite Irishman, the South’s favorite northerner, and the Jews’ favorite Catholic," McCormack maintained relationships with Southern Democrats, mainly Sam Rayburn of Texas, for 21 years during a period between 1940 and 1989 when the Speaker and Majority Leader positions were held by Democrats from Massachusetts and Texas. This so-called Austin-Boston Connection – the subject of a previous book by Nelson – reshaped the Democratic Party from a regional southern white Protestant party to one that embraced urban religiously and racially diverse ethnics, according to Nelson.

“Their impact on House politics and the national agenda was profound,” says Nelson, a congressional expert known for his definitive seven-volume set Committees of the U.S. Congress that covers every member's committee assignments and actions from 1789 to 2010. “The moderate and liberal Democrats now had their own alliance to counter the Conservative Coalition.”

Ultimately, Nelson doesn't claim to know why McCormack fabricated his past, but strongly suggests it was because he wanted to lift himself, and people back in Southie and across the country, out of poverty. "McCormack understood as clearly as the Irish political gatekeepers how politics could be used to advance oneself and to alleviate the economic hardship of their Irish-descended constituents.”