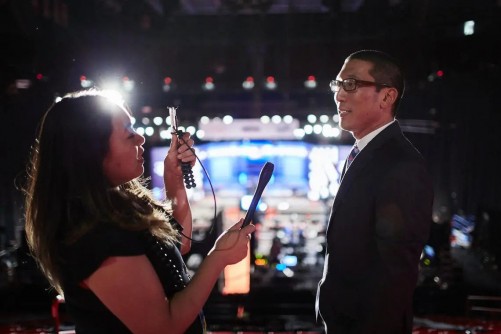 Some, however, might be left wondering, especially following the chaotic presidential debate just last week, if Trump and Biden are the only options out there.

Technically, no, says UNLV political scientist Dan Lee, but third-party candidates rarely see success in the ballot box, and some have a difficult time even making it onto the ticket to begin with. Some Americans might feel that they have to vote for the “lesser of two evils” – a dynamic that has played out in the U.S. for decades as more and more politicians and their political views have become increasingly polarized.

Here, Lee lays out the landscape of America’s two-party system, how it differs from other countries, the concept of a “wasted” vote, the role of independent voters, and what reforms might be needed to give third-party candidates a better shot in U.S. elections.

How did America’s two-party political system originate, and how does it differ from other countries?

Political parties were not created in the U.S. Constitution. Rather, political parties were created and maintained by politicians to help achieve their policy goals. This is a general theoretical underpinning to parties all across the world. What is unique about the American party system is how concentrated it is (just two parties) and durable (same two parties, Democrats and Republicans, since the 19th century).

There are numerous factors that contribute to the two-party system in the U.S., but electoral rules are at the heart of the issue. For instance, for elections to the U.S. House of Representatives, we use single-member districts under plurality rule. Only one candidate can win in any district. What happens is that voters who actually prefer a third-party candidate will instead vote for the “lesser of two evils,” since the third-party candidate is likely in last place in the polls leading up to Election Day. Contrast this with a rule that is used in many other countries: multi-member districts with proportional representation. A district may have 10 seats available to win. So, in this case, if a third party wins the fewest votes, say 10% of the vote, they can still win 10% of the available seats, or one seat. Voters in this type of electoral system, therefore, do not have the same incentives to abandon their favored party as in countries like the U.S. We call this dynamic — voting for the lesser of two evils — “Duverger’s Law” (named after a political scientist). This, in short, helps explain the general pattern of the U.S. having a two-party system, while many other countries have a multi-party system.

Another electoral rule that greatly impacts third parties is “ballot access.” Whereas the major parties automatically get a spot on the general election ballot, third party and independent candidates have to petition to have their names appear on the ballot. As the number of signatures required for successful petitioning increases, the harder it is for a third party to get onto the ballot. The height of the restriction varies by state, with some states setting the requirement so high that third party candidates can rarely, if ever, run.

How do third party candidates usually fare in American presidential politics against this backdrop? Do third-party candidates ever have a viable chance of winning? How do they fare in local, county, or state races?

Take, for instance, Ross Perot in 1992. In one sense, he was extremely successful, winning nearly 20% of the national vote. He came away, however, with zero electoral votes, as he did not come in first place in any states. Compare this with George Wallace in 1968, who was also quite successful in winning nearly 14% of the vote. He, however, won 46 electoral votes (out of 538). So, he was arguably much more successful than Perot. But how did Perot win no electoral votes, while Wallace won so many? The issue here is where the supporters are. In Perot’s case, his supporters were spread throughout the country. In Wallace’s case, his support was clustered in southern states, which enabled him to win the most votes in some of those states and consequently all of those states’ electoral votes.

I’ve heard that people who vote for a third-party candidate are considered to be ‘wasting their votes.’ Is that a fair argument?

Keep in mind that “Duverger’s Law” is what we call “positive theory,” rather than “normative theory.” Normative theory features theoretical questions and discussions of what “ought to be” or “should be” – i.e., moral questions. Positive theory is about simply trying to explain observed behavior. So, the wasted vote logic explains why voters abandon third party candidates. The theory, however, does not suggest voters "should" avoid wasting their vote on third-party candidates. There are indeed many reasons why voting for a third-party candidate is important and justifiable.

One aspect of their evolution is to co-opt an issue that was raised by a third party, i.e., adopt the third party’s issue position. This, for instance, explains why the Green Party has had limited electoral success – the Democratic party co-opted the Green Party’s issue by adopting more liberal environmental policies. But notice that the Green Party therefore has a significant influence in our two-party system – in this case, not by winning office, but rather by influencing one of the major parties. This point cannot be overstated enough: Third parties can play an important role in our two-party system, even if they are not winning office.

How has the two-party system contributed to heightened partisanship, and can America overcome the current deep political divisions without rethinking the way the system operates?

One of the most dominant patterns since the 1970s is the increased polarization of our elected officials. For example, Democrats in Congress have moved towards the left of the political spectrum, while Republicans have moved towards the right. There is a big debate about what has caused that polarization: gerrymandering, rising income inequality, the role of activists and primary elections, campaign contributions, etc. There are many potential culprits, but disagreement remains over what factors have played the biggest role.

But one thing is clear: partisan polarization of our politicians has led to stronger partisanship among voters. What is striking about this pattern is that voters have not become much more ideologically polarized since the 1970s – i.e., voters overall are actually very moderate on the issues. But when voters have polarized choices, it makes it look like voters have much stronger opinions and stark differences. For instance, suppose we ask a group to choose between having chocolate or vanilla ice cream. There will be some debate, but we wouldn’t expect any huge fights within the group. But now suppose we ask that group to choose between butter pecan or chocolate chip cookie dough. We might find strong objections to one or the other, so the group in this instance appears to be very divided and polarized. But this is the same group of people (in our little experiment). All we did was change their choices, and it leads to very different looking groups in terms of how divided they appear to be.

There is nothing inherently more divided or partisan about a two-party system. That is, multi-party systems are not any less divided or partisan. So, putting aside reforms to develop a multi-party system, the problem (if one thinks that there is a problem) is that our politicians are too polarized. This is why some individuals are pushing for certain electoral reforms. For instance, California adopted the use of a top-two primary in 2012 with the hope that it would lead to less polarized representatives. There is little evidence, however, that this type of primary actually has had that intended effect. But this is where political science research is at right now – trying to understand what is causing polarization so that we have a better understanding of how we might try to decrease it.

How do independent voters factor into the two-party system?

If you look at certain polls, like Gallup, it may appear as if there has been an increase in the number of independent voters over the past couple of decades. That pattern, however, is deceiving. Some surveys ask independents if they lean towards one party or the other, and those that do are termed “closet partisans.” These individuals basically vote just like voters that outright associate with one of the major parties. So, the general pattern is that increased polarization of our politicians since the 1970s has contributed to stronger partisanship among voters, not an increase in independents (only around 10% today are true independents).

But that is not to say that increased polarization has not had some sort of negative impact on voters. We have seen a rise of “negative partisanship,” where voters affiliate with a party because of their disdain for the other party, rather than positive feelings for their party. That is, some Democrats today are Democrats more for their disdain for President Trump and Republicans, rather than being drawn to the Democratic party (and vice versa).

Have any viable alternatives to the two-party system ever been proposed in America? Could there ever be an alternative, or is it too deeply entrenched in American politics?

Critics of the American two-party system are often too quick to blame the two-party system without considering whether a change to a multi-party system would actually be an improvement. Parties in multi-party systems tend to be stronger than our parties in the U.S., which could lead to even more partisanship than we see in America today. It could also give more power to extreme groups, since small, extremist parties can win seats to the legislature in countries that use multi-member districts and proportional representation.

And really, the differences between two-party and multi-party systems are often overstated. They are, in fact, quite similar with the biggest difference being the nature of coalition formation. In two-party systems, coalition formation happens before the general election. During the 2016 and 2020 Democratic presidential primaries, we saw this happening in the back-and-forth between the progressive and more moderate wings of the Democratic party. In multi-party systems, coalition formation occurs after the election, since it takes a majority vote to pass legislation and therefore necessitates some parties to work together as a coalition with a majority of votes. To think of it another way, suppose we have four parties that successfully win seats to the U.S. Congress but none of the parties wins a majority. This situation, in which those four parties will have to “play politics” with each other to get any laws passed, is not clearly preferable to what we have today.

What we may want to consider is that the problem is not the “two-party system,” but rather the characteristics of the current two parties that dominate our politics. We can then start thinking about reforms to change the types of candidates that are nominated by the parties and what types of candidates ultimately win office. This could include reforms to primary election or campaign finance law. Or reforms to nomination rules, like the use of super delegates in the Democratic presidential nomination, which can also impact the characteristics of the major parties. Or bringing things back to the initial topic of this piece: third parties can instigate positive, reformative changes to the major parties.