UWM Scholar Explores the Mysteries of Russia and Putin

The behemoth on the other side of the globe has long loomed large over American foreign policy. On the eve of the Russian presidential election, UWM scholar John Reuter talks about that country’s politics and policies. 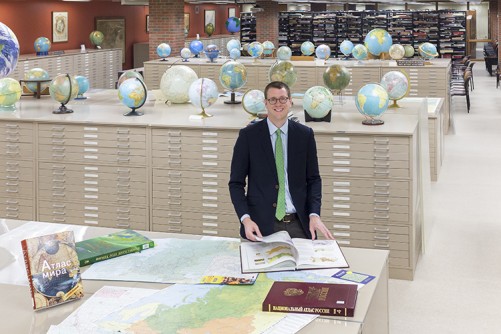 John Reuter in the American Geographical Society Library at UW-Milwaukee.

Newswise — John Reuter, assistant professor of political science at UWM, has been documenting, analyzing and participating in conversations in and about Russia throughout his 15 years as a political scientist. He studies authoritarian governments in Venezuela, Indonesia, Nigeria, Turkey and elsewhere.

Fluent in Russian, and with a working knowledge of Ukrainian, he designs public opinion surveys for Russian voters. This includes hiring pollsters to go door to door in Russia, where they ask about voter behavior, election fraud and political pressure in the workplace.

“When you ask Russian voters about their views on democracy, most are strongly pro-democratic,” Reuter says. “They want democracy; they think they’re living in democracy. Many don’t necessarily see a problem with how their government functions.”

On March 18, those voters will head to the polls for their seventh presidential election since 1990. Reuter, who holds a senior research appointment with the Moscow-based International Center for the Study of Institutions and Development, shared his political predictions and his long view on the way forward for improved U.S.-Russian relations. He also talks about the special counsel indictments that have roiled Washington, D.C., in recent weeks.

Russia holds presidential elections this month. The first round will be held on March 18. What can we expect?
Vladimir Putin will absolutely get an absolute majority.

Why do you study Russia?
I was drawn to studying Russian in high school in the late ’90s because there were such fundamental changes happening in that part of the world. Rarely in human history has a country gone through such profound changes – shifting political systems, a new economic structure – in such a short period of time. In grad school I had to decide between studying Russian history or politics. I chose politics; it seemed so consequential at the time.

What do you mean by the phrase ‘so consequential?’
I mean that the political issues on the agenda in Russia are in many ways more significant than those confronted by American voters and politicians. For example, we might tweak our health care system on margins, we fight about the budget and whether to adjust it by a couple billion dollars here or there. In Russia in the 1990s and early 2000s, they were deciding: ‘Will we have a welfare state? What will our electoral system look like? What type of capitalist system will we have?’ They were dealing with much bigger issues, and circumstances were changing rapidly.

Let’s talk about the current intersection in Russian and American politics: the 2016 general elections in the U.S., and the recently issued indictments against 13 Russian citizens and three companies as part of an ongoing investigation into Russian meddling.
There are several aspects of Russian meddling in the last election, some more severe than others. At one end, you have attempts to infiltrate American voting systems, and that is by far the most severe type of intervention and it’s also the one that gets talked about the least. There is no evidence Russian actors tried to change the results, but there is plenty of evidence they tried to gain access to voting systems in a number of states.

What do you think the Russians were trying to accomplish?
It’s a puzzle. Why did they do it? No one has access to the minds of the individuals who are planning this stuff, but I don’t think that they foresaw the outcome of the 2016 elections at all. Like most Americans, Russians thought Hillary would win the presidency. One interpretation is that they are just trying things out; this is a pilot operation. I don’t see any other explanation here.

This kind of activity, by the way, is not new. This meddling is something the Soviets had always done – funding different activist groups, organizing protests. But now, it’s easier than ever to insert yourself into someone else’s election due to social media and globalization.

Russia is an autocracy and America is a democracy. Russians, however, perceive their government to be democratic. Can you discuss the key structural similarities between our governments and where those similarities end?
On paper, our governments do look similar. The president and legislature are directly elected by the people; the legislature has power to constrain the president and effect laws; there is a judicial system in place, and a broadly similar constitutional structure.

Russian politics is different from American politics in two major ways: The president is very, very popular and, of course, Russia is not a democracy. It’s an autocracy with the trappings of a democracy. In Russia, the president and his allies use their positions, and the associated power and privilege, to disadvantage their opponents to a much greater degree than incumbents in U.S. Some autocratic systems do this to such a degree that their elections can no longer be called free and fair.

You mentioned the popularity of Vladimir Putin. Russians know him well. Are there any political or historical figures whom he resembles and that can help Americans understand him better?
Putin’s popularity is complicated – in large part due to the fact that Russia is not a democracy and the state controls the media. There are a lot of global leaders with whom he shares the characteristics of being inherently popular and using the privileges of his office to disadvantage opponents. Hugo Chavez of Venezuela comes to mind, a compelling and charismatic leader and speaker, though Putin is perhaps a less charismatic figure.

Russians who support Putin see him as competent, strong, honest – interestingly enough – and view him as a professional. He’s very well spoken and there’s even something Clintonesque about him: He’s a policy wonk. Putin has a remarkable mastery of policy details and can go on and on about pensions or inflation. He has it together.

Can the United States and Russia look forward to a more productive international partnership in the near future?

My own view is that we need to find ‘win-win’ situations in areas of mutual interest – Iran, Syria, nuclear nonproliferation. There’s already a blueprint in place that proves we’ve been able to find areas of agreement and collaboration. The stakes were much higher during the Cold War, when there was a fundamental ideological conflict between our two countries.

People should be aware that there are now lots of positive connections between Russian and American society. I receive funding from the Russian government to do my research on Russian autocracy. It’s not as closed off as some people might think.

Finally, it’s necessary to depersonalize our relationship with Russia because Putin is not going anywhere. We have to deal with him. It’s not useful to belabor the point, ‘Is he a bad guy or not?’ It’s more useful to focus on building a pragmatic relationship with the Russians.