50 Years of Chicago NOW at UIC 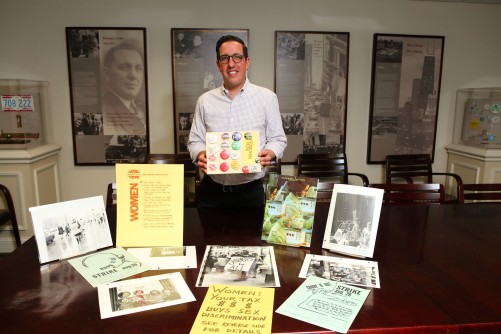 David Greenstein, visiting lecturer for special collections and university archives at the University of Illinois at Chicago curated “Don’t Iron While the Strike is Hot: Chicago-NOW’s fight for Equality,” an exhibit in UIC’s Richard J. Daley Library.

Newswise — Years after Congress passed the Civil Rights Act of 1964, women were still experiencing blatant discrimination and the Chicago chapter of the National Organization for Women took it as its mission to help change that.

The group targeted many local companies like Sears, which would pass women over for high-level positions, United Airlines for running “Executive Flights” that barred female passengers, and the Chicago Tribune for running segregated help-wanted ads for male and female job hunters.

Founded 50 years ago, the Chicago chapter of NOW focused much of its energy on employment-related issues because its founders had roots in the workers’ rights movement in Chicago, says David Greenstein, visiting lecturer for special collections and university archives at the University of Illinois at Chicago.

To celebrate the Chicago chapter’s anniversary, Greenstein is curating “Don’t Iron While the Strike is Hot: Chicago-NOW’s fight for Equality,” an exhibit in UIC’s Richard J. Daley Library that uses documents, photographs, and other memorabilia from its collection to document the local group’s fight for gender equality. The collection had been previously donated to UIC and consists of “hundreds and hundreds” of boxes of items, he said.

Thanks to the work of NOW, Aug. 26 became known as Women’s Equality Day to celebrate passage of the 19th Amendment that gave women the right to vote on that date in 1920.  But even after the passage of the Civil Rights Act in the 1960s, women were still fighting for equality,  Greenstein noted.

“Other types of desegregation had already begun but women were still not allowed equal access to many public accommodations,” he said. “They tried all kinds of different ways to change these things, to fix these kinds of inequalities.”

The exhibit, which is open to the public, dramatizes the extent of the fight that the chapter was embroiled in. The group had struggled to use everything from lawsuits to lobbying efforts to get government and corporate officials to honor and enforce the tenets of the Civil Rights Act for women but ultimately it came down to economic pressure.

“One of the main points I want to make in the exhibit is that they tried all kinds of different ways to change these things, but the things that really made substantial changes were more direct actions like strikes, boycotts and protests on the streets,” Greenstein said. “These direct actions put public pressure on groups to change.”

Some of the documents on display in the exhibit include a 1970 flier calling for women to strike on the 50th anniversary of the 19th Amendment’s passage. Among the items demanded by the group were equal pay for equal work as well as equal job opportunities, publicly-funded childcare centers, jobs listed in newspapers by occupation, not by gender, and the passage of the Equal Rights Amendment.

“Most of those on the list are still lacking,” Greenstein said of the current status of the demands.