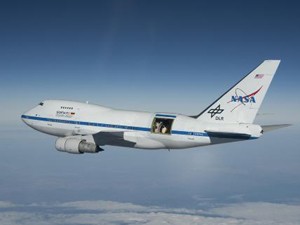 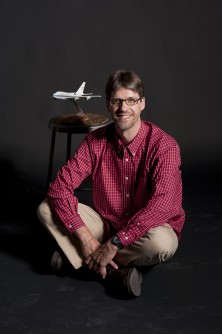 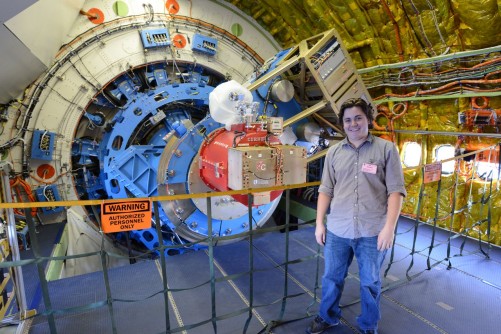 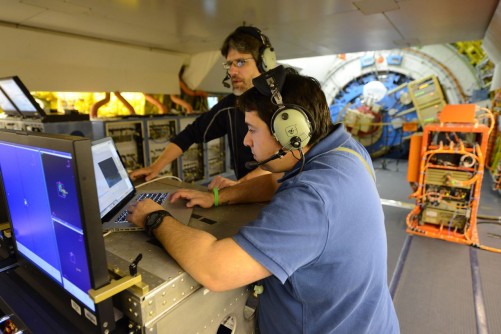 Newswise — Soaring at 41,000 feet in the air, a team of Ithaca College physics students and a professor recently took photos from a flying observatory to help discover what makes up our universe.

A collaboration between NASA and other researchers, the Stratospheric Observatory for Infrared Astronomy (SOFIA) provides key insight into the formation and evolution of stars and planets. SOFIA allows scientists to observe infrared light and collect data—such as never-before-seen images of Jupiter and the galaxy M82—nearly impossible to obtain previously.

SOFIA is made up of an eight-foot-wide, 17-ton telescope situated within a modified Boeing 747. While in flight, the cavity door of the plane opens, similar to a large garage door opening, to expose the giant telescope and capture images of space. A non-pressurized open area in the fuselage, or side of the plane, is then created to route the airflow over the telescope while the aircraft flies at 500 mph.

Luke Keller, Ithaca College associate professor of physics, is a member of the team assisting in the test flight series for the airborne telescope using an infrared camera system referred to as FORCAST (Faint Object Infrared Camera for the SOFIA Telescope).

“Astronomers and physicists are constantly looking for better ways to view space and learn about our environment beyond Earth’s atmosphere,” Keller says. “With SOFIA now in operation, we are going to see the universe in detail never before possible.”

Keller is responsible for developing and testing the software used in flight to process and analyze data, assisting with optical testing, and collaborating on the development of the camera’s calibration system.

The ability to image astronomical objects and environments at different infrared wavelengths enables Keller and his colleagues to analyze physical characteristics such as temperature and composition, thus allowing the scientists to watch dynamic processes taking place.

A total of 10 of Keller’s students made contributions to SOFIA. Three of those 10 also had a chance to experience a SOFIA flight. Two recently graduated in May with bachelor degrees in physics and the third student will graduate in December also with a bachelor degree in physics.

• Rob Lewis developed software that he was able to see while analyzing data from a previous flight after the telescope’s low voltage issues restricted him from experiencing a flight on SOFIA.

• Martin Garay MacLean set up at the FORCAST control center during his flight experience to test observing modes for light and radiation sources. MacLean saw data coming in real time and kept a list of possible upgrades to the software to work on as part of his summer research internship.

Over the next 20 years, additional instruments will be installed on the telescope, each one designed to investigate targeted infrared wavelengths and capture even more detail from space.

For more information on Ithaca College’s involvement with SOFIA and interview opportunities with Luke Keller and his students, contact Keith Davis.

SOFIA is a collaboration of NASA; the Deutsches Zentrum für Luft und Raumfahrt, the German agency that designed and built the telescope; and teams of scientists and engineers at more than 30 universities, laboratories, and research centers.For more information on SOFIA, visit www.sofia.usra.edu.