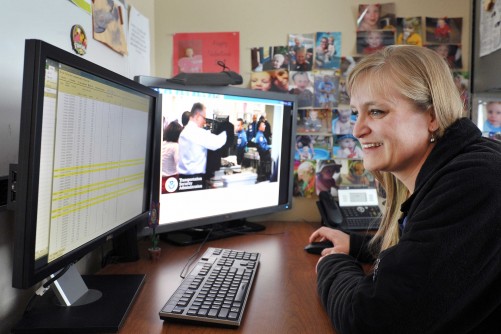 Though seen here looking at data on a computer, Sandia National Laboratories' Ann Speed spends much of her time studying humans. A cognitive psychologist by training, Speed’s work is aimed at quantifying human behaviors, an expertise highly valued — and funded — by the Department of Homeland Security’s Transportation Security Administration.

The TSA-funded project, led by Sandia researchers Ann Speed and Kiran Lakkaraju, focused on the impacts on threat detection when transportation security officers are asked to switch between the pre-check (indicated by TSA as TSA Pre✓) and standard passenger lanes. The pre-check lanes, introduced recently, speed passengers through considerably faster, since pre-approved passengers are not required to remove shoes or items from their carry-on bags.

The research project assessed whether TSA’s airport security officers experience cognitive impacts when switching from the pre-check lane to a standard lane, and vice versa. “We know that expectations have an impact on how people make decisions, and that the actual rate of target items in a sample can also impact decision making. So we designed an experiment to independently test the effects of expectations and threat rates,” Speed said.

Though she can’t reveal specific details from the study, Speed says some mitigations based on their findings likely will be rolled out to airports across the country. “It’s really exciting to know that your work has had that kind of impact,” she said.

Human behavior studies and other Sandia contributions to homeland security

Sandia has a long history of important research and development for homeland security needs, including breakthrough tools and technologies such as explosive detection devices, chemical and biological countermeasures, border security, and nuclear and radiological security systems.

“More and more around the labs, people are starting to realize that the human element can be just as important as the hardware, software or engineering,” Speed said.

TSA has funded much of Speed’s Sandia work since 2009, with other funding coming from the Department of Homeland Security’s Science and Technology directorate.

From 2009-2010, Speed’s colleague Andrew Cox spearheaded an experiment that analyzed what happened when security officers got advice from expert peers on whether carry-on bags contained threats. Speed led the experiment and a second project that independently manipulated supervisor emphasis on either accuracy or throughput, as well as image resolution of screened baggage, and the impact of each on security officers’ decision-making. The study focused on whether higher resolution reduces the effects of supervisor pressures on security officers by helping them feel more certain of their decisions.

More specifically, the study asked how such pressures influence a security officer’s decisions. Does the supervisor stress speed and quantity of passengers and baggage screened? Or is he or she more concerned with accuracy of found threats? With image resolution, the questions are similar: how do the varying degrees of image resolution affect the decisions of security officers charged with detecting threats? Does image resolution slow activity at the X-ray station? Does it improve accuracy?

This earlier work on TSA supervisor emphasis, Speed said, informed some of the mitigations developed as a result of the recent lane-change study.

Data are the bread and butter of human behavior studies. As she does with all of her TSA projects, Speed used several computers for the lane-change study, machines loaded with software that allowed her to present about a thousand images of baggage to the TSA officers. The images were captured by actual Smiths Detection AT-2 X-Ray scanning machines used at airport checkpoints.

The experiments involved statistical analyses of how effectively the officers identified prohibited items that are found in some of the images. The analyses were performed with up to 200 TSA officers.

“This kind of data collection and analysis can tell us how officers are making their decisions, their accuracy, and the rate of false alarms,” Speed said. “We’re capturing and analyzing their responses and decision times in different operational environments. In the end, the data inform us and our customer about the factors that impact officers’ accuracy.”

The work, Speed adds, was – and is always – reviewed and approved by Sandia’s Human Studies Board, TSA officials and the Department of Homeland Security privacy office.

The success of the work has led directly to additional TSA-funded efforts, including a current project that explores how long officers can look at scanned images before their performance starts to degrade due to fatigue or other factors. Another project aims to understand the attributes airport security officers bring to their jobs prior to training that may influence their ability to perform duties other than the X-ray examination of bags.

In addition to the increased level of attention that TSA is giving to Sandia’s research, Speed said other organizations have taken notice as well. Sandia recently signed a memorandum of understanding with the Allen Institute for Brain Science, for example, and continues to explore opportunities with the Department of Defense and others.

An external advisory board of distinguished scholars, cognition scientists and others has repeatedly acknowledged that Sandia has a differentiating capability in this area.

“There is no other place that can do what Sandia can do in the area of human decision-making in high-consequence threat scenarios,” Speed asserts. “We are it.”________________________________________Sandia National Laboratories is a multi-program laboratory operated by Sandia Corporation, a wholly owned subsidiary of Lockheed Martin Corp., for the U.S. Department of Energy’s National Nuclear Security Administration. With main facilities in Albuquerque, N.M., and Livermore, Calif., Sandia has major R&D responsibilities in national security, energy and environmental technologies and economic competitiveness.Sandia news media contact: Mike Janes, [email protected], (925) 294-2447