Researchers at Fresno State and CSU Fullerton are among those studying better ways to prevent the most common form of dementia. 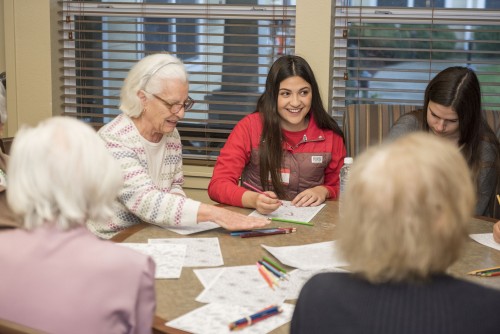 Staying social and learning new things are two habits that may help stave off Alzheimer's or slow progression of the disease.

Newswise — More than five million Americans. That's how many people currently have Alzheimer's disease, the progressive brain disorder that eventually destroys brain cells, leading to memory loss and changes in thinking and other brain functions.

But that's not the truly terrifying statistic — it's the number of Americans projected to have the disease by 2050, as many as 16 million people.

While there's still no cure for Alzheimer's, neuroscientists are working hard to develop effective treatments and ways to prevent the disease. That research got a shot in the arm recently when Microsoft founder Bill Gates committed $100 million to speed new trials and experimental approaches.

Given that Alzheimer's is the sixth-leading cause of death in the U.S. and that an American is diagnosed with it every 66 seconds, the stakes are clearly high and the need for better treatments is urgent.

According to the Alzheimer's Association, there are currently five FDA-approved drugs that treat symptoms of the disease. All temporarily help memory and other cognitive issues, but none treat the cause or causes.

New drugs in development aim to modify the disease process by impacting one or more of the many wide-ranging brain changes Alzheimer's causes. By targeting these changes, researchers hope these new pharmaceuticals may slow or stop disease progression.

Santanu Maitra, Ph.D., associate professor of chemistry at Fresno State, has studied Alzheimer's and other neurodegenerative diseases for nearly 12 years and believes that lowering the body's production of Apoe4, known as a "bad protein" linked to the onset of the disease, could delay or even avoid the start of Alzheimer's in the brain.

Dr. Maitra cautions that there's still much to learn about the central nervous system and Alzheimer's disease, and there's no consensus about what causes the disease. But Maitra and his research partner, Dr. Jungsu Kim, a biologist at the Mayo Clinic in Jacksonville, Florida, believe that the Apoe protein, which the APOE gene helps produce in the body, should be reduced in the brain to treat Alzheimer's disease. Like many other conditions, Alzheimer's likely develops as a result of complex interactions among factors such as age, genetics, environment, lifestyle, and coexisting medical conditions. So lowering Apoe might be just one of a number of approaches, but one that could be tailored to the patient, says Maitra. "In the future, if our research succeeds and we develop a drug/medicine for Alzheimer's disease, it might be specific to humans with particular genotypes."

Can You Lower Your Risk for Alzheimer’s?

Math P. Cuajungco, Ph.D., professor of biological science at CSU Fullerton, likes to use the acronym "SHIELD" to remember the lifestyle factors that may help reduce the odds of developing Alzheimer's. SHIELD was coined and developed by Dr. Rudy Tanzi, Cuajungco’s former director at Harvard Medical School. The letters stand for:

Interact with others,  be social

Dr. Maitra adds that keeping LDL cholesterol low and HDL cholesterol high might also offer some protection against this devastating disease. Some experts, he says, also believe that keeping inflammation low can help keep Alzheimer's at bay, though this has not been proved.