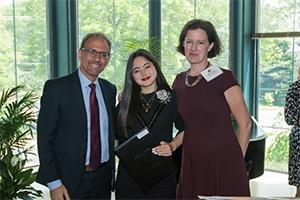 Newswise — American University was named one of the nation’s leading universities and colleges for Fulbright U.S. Students. AU has 10 students on Fulbright grants studying around the globe this year. The U.S. Department of State’s Bureau of Educational and Cultural Affairs, which manages the Fulbright program, announced the institutions with the most scholars today.

“Fulbright scholars foster mutual understanding, share knowledge across communities, and improve lives around the world. These changemakers represent American University’s commitment to service and empowering lives of purpose. As we strive to bring educational opportunities to learners everywhere, we are proud that our Fulbright students represent the United States as teachers and scholars on five continents,” said Dan Myers, provost and chief academic officer.

The Fulbright program is the U.S. government’s flagship international education exchange program. It was created to increase mutual understanding between the people of the United States and the people of other countries. The primary source of funding for the Fulbright Program is an annual appropriation made by the U.S. Congress to the U.S. Department of State’s Bureau of Educational and Cultural Affairs. Over 2,200 U.S. students and over 900 U.S. college and university faculty and administrators are awarded Fulbright grants each year. In addition, some 4,000 Fulbright Foreign Students and Visiting Scholars come to the United States annually to study, lecture, conduct research, or teach their native language.

Since its inception in 1946, the Fulbright Program has given over 390,000 passionate and accomplished students, scholars, teachers, artists, and professionals of all backgrounds and fields the opportunity to study, teach and conduct research, exchange ideas, and contribute to finding solutions to important international problems. The global network of Fulbrighters fosters mutual understanding between the United States and partner nations, advances knowledge across communities, and improves lives around the globe.

Fulbright is active in more than 160 countries worldwide and partners with participating governments, host institutions, corporations, and foundations in foreign countries and in the United States.  The list of top-producing institutions is published annually in The Chronicle of Higher Education. The Fulbright competition is administered at AU through the Office of Merit Awards in AU’s Career Center.

Education In the Workplace