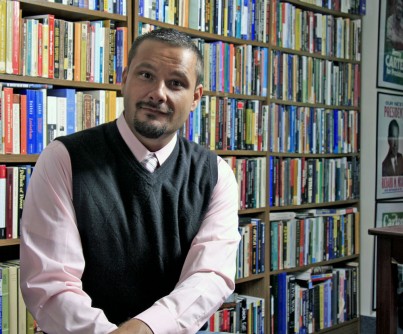 Dec. 16, 2014: It's happened again – ISIS militants have committed yet another atrocity. Reports show that approximately 130 children were killed in a school in Pakistan, with ISIS claiming responsibility.

We see these incidents in the news, but many people do not understand what ISIS is, where they came from, what they want and how we can meet this threat head-on.

Nova Southeastern University has an expert in the area of Middle East politics, Islamic fundamentalism and religious extremism who can help bring some clarity to this issue, while assisting reporters working on related stories. Dustin Berna, Ph.D., is an assistant professor of Conflict Resolution and Political Science at Nova Southeastern University’s Graduate School of Humanities and Social Sciences (SHSS.) He is also the Director of Assessment and Planning for NSU's SHSS.

Berna has created a video where he explains what ISIS is all about, how they’ve come into existence, what it is they want and an idea on how the U.S. can address this threat. You can view the video on the NSU News Team YouTube page at https://www.youtube.com/watch?v=-0J5FfAzzs4. Berna's research specializations include Middle Eastern politics, Islamic fundamentalism, religious extremism, social movements, terrorism, and political institutions. He has taught classes on the Iraq War, Islamic politics, Middle Eastern politics, terrorism, political violence, international relations, U.S. foreign policy, the politics of developing states, revolutions, international negotiation and violence prevention. Berna has written numerous articles on topics that range from terrorism and Islamic fundamentalism to Iranian political institutions and Islamic democracy. Berna has experience working with print and broadcast media. Berna earned his doctorate from the University of New Orleans in 2008. His two major fields of study were Middle Eastern politics and international relations. American political institutions were third and minor field. His dissertation was a quantitative study that evaluated the causes and electoral success of Islamic fundamentalist movements. Berna has collected and coded every Islamic fundamentalist group that is, or has been, in operation in the Islamic world since 1970.

About Nova Southeastern University: Situated on 314 beautiful acres in Ft. Lauderdale, Florida, Nova Southeastern University (NSU) is a dynamic research institution dedicated to providing high-quality educational programs at all levels. NSU is an independent, not-for-profit institution with approximately 26,000 students at campuses in Fort Lauderdale, Fort Myers, Jacksonville, Miami, Orlando, Palm Beach and Tampa, Florida as well as San Juan, Puerto Rico. NSU awards associate's, bachelor's, master's, specialist, doctoral and first-professional degrees in a wide range of fields. NSU is classified as a research university with "high research activity" by the Carnegie Foundation for the Advancement of Teaching, and it is one of only 37 universities nationwide to also be awarded Carnegie's Community Engagement Classification. For more information, please visit www.nova.edu. Celebrating 50 years of academic excellence!