Behind the scenes of ‘House Party’ 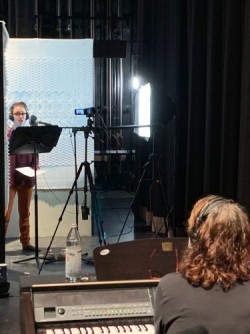 Jenna Makkawy records her vocals in a makeshift recording booth.

Newswise — MOUNT VERNON, Iowa - From green screens to makeshift recording studios the students and faculty of the Cornell College Department of Theatre and Dance are discovering new ways of creating their masterpieces.

When the pandemic hit and theatres everywhere halted live productions, Professor of Theatre and Dance Scott Olinger knew the show must go on.

“I thought that is unacceptable,” he said. “Artists need to continue to produce.”

Over the summer he and several students set to work on the first digital production of the year, a 35-minute film production called “House Party.” The show stars Jenna Makkawy, a senior from Chicago earning her B.F.A. in musical theatre.

“This has been such an incredible learning experience for me as a musical theatre stage actress to transition to film,” Makkawy said. “I got to record the songs we were set on in our own makeshift studio, which was awesome. I got to experience acting for the camera, which was very daunting, and I also experienced all the normal aspects of a production in this weird virtual world we are in now.”

The show streamed in late October.

Olinger described the show as a variety show, a throwback to “The Carol Burnett Show” or “The Muppets” with six musical numbers, plus a song for the credits.

“We slowly started identifying musical numbers and we just started coming up with ideas for each of them,” Olinger said. “I worked with a team of about five students over the course of the summer and we basically talked about what they wanted to explore. One student said we just took a puppet class and it would be great if we could explore that somehow. I was thinking about ways we could potentially reach out and use some of the musicians and other talent in Cedar Rapids and Iowa City.”

One of the musical numbers is a song by a locally popular band, The Pork Tornadoes. Instead of making a personal appearance, the band members will be featured as puppets. The ideas kept coming and the show transformed before their eyes into “House Party” where every door that opened led to a new magical place with a variety of different scenes and songs.

And every show with music needs some dancing, right?

For that, they turned to Cornell’s new Dance Artist in Residence Eduard Forehand.

“I was given a theme for the work so that kind of helped me go in a certain direction, but within that, I had plenty of freedom to move and dance any way all of us saw fit,” Forehand said. “I used five dancers in total and was constantly asking for their input and feedback. This was the first show I have done here at Cornell and had a quick turnaround of five rehearsals to do it in. It was a most magical whirlwind.”

In all, about 30 students were included in the production. Some, who are distance learning due to the pandemic, took part in editing pieces of the show such as producing title and credit designs. Those on campus had to think about COVID-19 safety protocols with every step.

“To limit the amount of people in the space, when we did things like costume fittings or check-ins, they were all over Zoom with our costuming crew,” Makkawy said. “I had to definitely step up to the plate and be responsible for all of my costumes and props. It was an exciting challenge!”

While it’s a challenge that no one expected, students and faculty are using this as a learning opportunity. That means reshooting pieces that didn’t quite turn out right and understanding the differences between acting for a live audience and acting for a camera.

Olinger says the finished show is intended to be a piece of escapism for audiences to just sit back and relax.

“Enjoy some music, smile, and try not to be so weighed down with all of the terrible things that are going on right now in the world,” Olinger said. “It’s a bit of entertainment that feels like yesteryear.”

And while he notes that the show may not be perfect, it’s no doubt their first virtual masterpiece.

“I think it has been a really, I hope, empowering experience for students.”

Three more virtual productions are scheduled to take place throughout the academic year for the mainstage season.