The Illuminoggin, an anatomically correct giant glowing brain that rides on top of The Think Tank, made its debut on UChicago's main Quad for Brain Awareness Day 2015. The Think Tank is a mobile neuroscience lab under the direction of psychology assistant professor Daniel Casasanto designed to take brain science beyond the walls of the university. 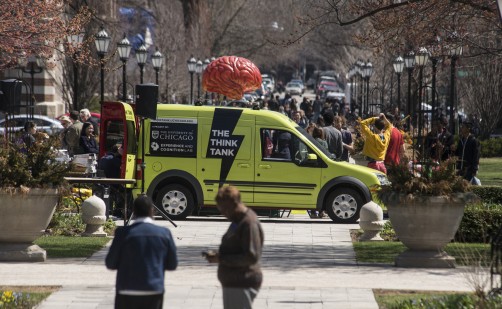 The Illuminoggin—a giant, anatomically correct brain that rides on top of The Think Tank—arrived at the University of Chicago Main Quadrangle as part of the grand finale of Brain Awareness Week.

Newswise — UChicago’s Main Quadrangle had a little more brain power than usual when the Illuminoggin recently made an appearance. The Illuminoggin is a giant anatomically correct glowing brain that rides on top of The Think Tank, a mobile neuroscience lab headed by Daniel Casasanto, assistant professor of psychology.

The Think Tank and Illuminoggin were parked in the center of the Main Quad as part of the grand finale for Brain Awareness Week. For NEURO Club president and fourth-year student Anne Krok, it’s an opportunity to teach anyone who would stop about brain function.

To make the subject matter more accessible than say, brain science, The Think Tank brainiacs (student educators) offered demonstrations. One was a brain-computer interface that allowed participants to control computers using their brainwaves. This exercise has the potential for real-world application, according to Casasanto.

“For example, this technology to control electronics with your brain waves could potentially help quadriplegics who cannot do things with their hands, but whose brains work perfectly well,” said Casasanto.

Another demonstration allowed participants to experience rapid neuroplasticity by wearing prism goggles and playing their worst ever game of beanbag toss. The prism goggles alter the wearer’s perception, and even though they think they’re tossing the beanbag straight to the target, they are really throwing to the left or right. “It was very difficult,” Krok explained. “You put on these glasses and they alter your perception and the sensory input coming into your brain.”

Eventually the brain adjusts to the perception with the goggles and allows the participants to hit the target. But, then when the goggles are removed, it takes a few minutes for the brain to readjust. The whole point is to show how quickly the brain can change.

“The goal is to engage the undergraduate population and show them the progress and benefits of brain research, and today we did this by having a super-sized glowing brain on top of The Think Tank,” said Krok.

Casasanto said look for the The Think Tank to be out and about this summer as they have a number of gigs lined-up to take neuroscience to the schools and at community events. “When you start thinking about the science of brains, that’s the science of people,” added Casasanto. “That’s the science of what makes us who we are and it tends to get people interested.”