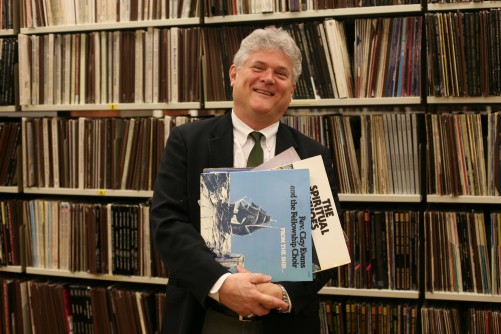 Newswise — The Black Gospel Music Restoration Project -- a search-and-rescue mission launched by a Baylor University researcher to save little-known recordings from yesteryear's Golden Age of black gospel --will become a permanent feature of the Smithsonian Institution's National Museum of African American History and Culture.

With February – Black History Month — only a few days away, Baylor is celebrating the fact that the collection (BGMRP), managed and maintained by Baylor Libraries' Digital Projects Group, will be among materials displayed at the museum (NMAAHC), according to museum officials and BGMRP founder Robert Darden, an associate professor of journalism, public relations and new media in Baylor's College of Arts & Sciences. The museum will open its doors in 2015.

"When we first conceived what would become the Black Gospel Music Restoration Project, we really had two goals in mind ... both of which seemed impossibly distant and far-fetched at the time," Darden said. "One, we wanted to begin the never-ending process of identifying, acquiring, digitizing and cataloguing gospel music's fast-vanishing vinyl legacy. I feel so blessed that we're well on the way to accomplishing that goal. This is an ongoing process that I hope and pray continue long after I'm gone. "The second goal dream was to make this priceless, extraordinary music widely available," he said. "Working with the Smithsonian's new National Museum of African American History & Culture will go a long way to making that second dream a reality."

While vintage albums by such legends as Mahalia Jackson are available on CDs, music by lesser-known greats such as the Spirit of Memphis were hard to find, as Darden discovered while writing his book People Get Ready! A New History of Black Gospel Music.

From the 1940s through the 1970s, because of primitive technology and expense, it was hard for many musicians to make live recordings -- usually 45rpm or 78rpm records, Darden said. A surprisingly large number of "B" sides of old 45s of gospel songs address the subject of civil rights, the Vietnam War and other social issues. Darden and Dwandalyn Reece, the NMAAHC's music and performing arts curator, view the recordings as an important addition to help museumgoers understand gospel's contribution to both societal issues and spiritual life.

The project was sparked in 2005 by an op-ed piece to The New York Times written by Darden, in which he lamented the loss of many of the country's recorded collections of black gospel music. That appeal generated a lead gift from collector Charles M. Royce, whose gift funded equipment purchases and the hiring of the first audiovisual specialist. The project officially was launched in 2008.

Among project collaborators is Bob Marovich of Chicago, a gospel music collector and blogger, who had a packed walk-in closet holding more than 3,600 gospel 45s and 78s and more than 1,600 gospel LPs. He and Darden became friends via email shortly after the project began, and Darden credits much of the project's success to Marovich's generosity with his collection.

Since then, Darden's promotion, combined with the knowledge of Baylor librarians and the technical expertise of Baylor's Digital Projects Group, has resulted in a collection of nearly 8,500 "sides" digitized - LPs and 45s, primarily -- with a sample of the collection available through Baylor on iTunes http://www.baylor.edu/itunes/ The collection will be part of the NMAAHC Musical Crossroads exhibition to help tell the story of African-American music from the arrival of the first Africans to arrive in American through the present. In a story from NMAAHC's Tumblr blog http://nmaahc.tumblr.com/, Reece said that the recordings also may be used to highlight the regional diversity of early gospel music.

"Not all gospel recordings made during the pinnacle of gospel's popularity were made on major labels," she said. "Many were done in connection with local churches, and there are differences in style based on where these types of recordings were made." Pattie Orr, vice president for information technology and dean of University Libraries at Baylor, said that the project fits well with Baylor's mission.

"We were already expanding into digital preservation of print materials, building a center whose sole purpose was to take our print collections, digitize them for preservation and then share them with the world, where possible within copyright," she said. "When Bob Darden was approached about preserving black sacred music and he came to us, it was a natural fit. Instead of digitizing only print culture, this project blessed us with the opportunity to get into digital audio preservation -- a challenge we embraced wholeheartedly and, now, with great success.

"We are preserving a phenomenon that is significant to American cultural history that will be valuable for future research," Orr said.

ABOUT BAYLOR UNIVERSITY Baylor University is a private Christian university and a nationally ranked research institution, characterized as having "high research activity" by the Carnegie Foundation for the Advancement of Teaching. The university provides a vibrant campus community for approximately 15,000 students by blending interdisciplinary research with an international reputation for educational excellence and a faculty commitment to teaching and scholarship. Chartered in 1845 by the Republic of Texas through the efforts of Baptist pioneers, Baylor is the oldest continually operating university in Texas. Located in Waco, Baylor welcomes students from all 50 states and more than 80 countries to study a broad range of degrees among its 11 nationally recognized academic divisions. Baylor sponsors 19 varsity athletic teams and is a founding member of the Big 12 Conference.

ABOUT THE BLACK GOSPEL MUSIC RESTORATION PROJECT Some of the project's digitally recorded music is available for free download on Baylor University's content on iTunes U. The site includes an interview called "A Gospel Journey" with Darden, as well as joint interviews with Darden and Marovich. Baylor has obtained for records and music in various taped formats from throughout the world for preservation. Ongoing project work includes a catalog of the most at-risk music from the black gospel music tradition. Those participating in the project also are compiling taped interviews, informal photos, music programs, newspaper clippings and sheet music.