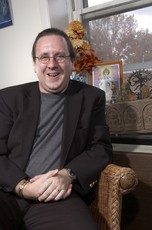 Newswise — An Elizabethtown College religion professor has written a book that presents Hinduism as the 'universal' religion, capable of providing a model for global inter-religious cooperation and world peace.

"A Vision for Hinduism: Beyond Hindu Nationalism" builds upon Jeffery Long's arguments for religious pluralism developed in his doctoral dissertation for the University of Chicago. In his book, he argues for a traditional pluralistic understanding of Hinduism " as articulated by such figures as Sri Ramakrishna and Mahatma Gandhi " in opposition to the narrow identification of Hinduism with Indian nationality and ethnicity that characterizes contemporary Hindu nationalist movements.

Long asserts that Hindu nationalism is not only destructive of communal relations, but that it also prevents Hinduism from emerging as a world religion in the true sense of the term. He presents a vision of Hinduism as a tradition capable of pointing the way toward a future in which all the world's religions manifest complementary visions of a larger reality - and in which they all, in various ways, participate.

Reviews of Long's manuscript have described it as "both highly relevant and timely" and "fascinating, ambitious and represents an important foray into inter-religious exchange."

Long has taught at Elizabethtown College since receiving his doctoral degree at the University of Chicago in 2000. He is the author of the forthcoming "Jainism: An Introduction" and has published in Prabuddha Bharata, The Journal of Religion, Science and Spirit, Creative Transformations and several edited volumes. Long has presented papers for a variety of scholarly organizations, including the American Academy of Religion, the Association for Asian Studies, and the Society for Asian and Comparative Philosophy.

Ranked as one of the best colleges in the northern United States by U.S. News and World Report, Elizabethtown offers its 1900 students 53 academic programs in the liberal arts, sciences and professional studies. Driven by its motto to "Educate for Service," Elizabethtown centers learning in strong relationships, links classroom instruction with experiential learning, emphasizes international and cross-cultural perspectives and nurtures the capacity for lives of purpose.

A Vision for Hinduism: Beyond Hindu Nationalism