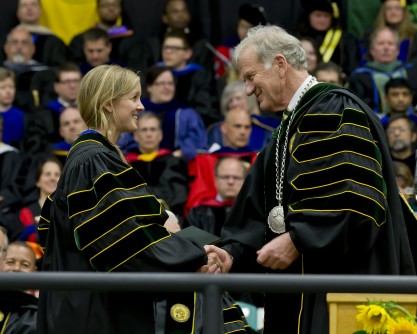 Newswise — Bridges to Prosperity CEO Avery Bang received an honorary doctor of science degree from Clarkson University on May 10.

"As you embark on this incredible journey beyond Clarkson, I really suggest to you just one thing," said Bang in addressing the students. "Don’t question your ability. Don’t get too wrapped up about which grad school to go to or what job or what salary point. Your success is forthcoming, I promise."

"Be inspired. Do something to give back to society if you can. Definitely follow your dreams. Be available for your friends and family. Support your colleagues and siblings in their crazy, wild ambitions. Expect them to do the same.

"If you have the ability, share that privilege and opportunity, that you’ve been given, with others. If mentoring is your thing, go be a big brother or big sister. If you’re into construction, like I am, maybe it’s showing up at a habitat for humanity site and getting some young person excited about engineering. Serve your local soup kitchen. Serve at your church. Whatever you do, I beg of you, please find inspiration in your day-to-day. Whether it’s at home, at your job, if it’s half a world away, it’s within each and every one of us."

The degree was awarded for Bang's "commitment to engineering that benefits humanity, for her dedication to teaching sustainable engineering practices, for her work connecting communities to expanding opportunities, and for her leadership that inspires engineers and people in the developing world to join forces and build a better future."

Bang believes that every person has a right to safe access -- and she has built an innovative, scalable approach to act on that belief. Since joining Bridges to Prosperity (B2P) as a volunteer in 2006, Bang has developed a scalable model to ensure safe year-round access to schools, markets and health clinics through pedestrian bridge building and training in rural developing communities.

As one of ENR’s Top 25 Newsmakers of 2012, Bang was also honored on ENR Mountain Region’s Top 20 Under 40 list in 2013, and was selected as one of the American Society of Civil Engineers (ASCE) Fresh Faces in 2011, recognizing the top ten Civil Engineers under 30. Bang is also a Distinguished Young Alumni of the University of Iowa and recipient of the Recent Alumni Award from the University of Colorado at Boulder.

She has written for Engineering News Record’s Future Tech Blog, and was an invited guest editorialist for ASCE’s Structure Magazine.

Bang also teaches cable-supported pedestrian bridge design at the University of Colorado in the Mortenson Center for Engineering in Developing Communities.

She received her bachelor of science degree in civil engineering and a bachelor of arts in studio art from the University of Iowa, and later completed a graduate degree in geotechnical engineering at the University of Colorado Boulder. Her graduate research, which considered appropriate geotechnical survey and design for rural low-tech applications, was conducted with National Academy of Engineering member Bernard Amadei.