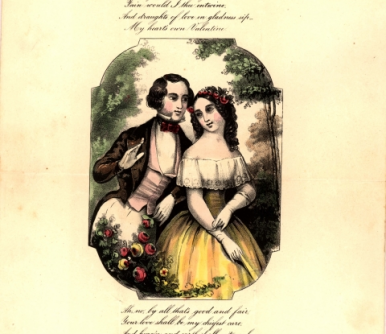 The honey dew is on thy lip, Fain would I thee entwine, And draughts of love in gladness sip— My heart's own Valentine. Ah, no, by all that's good and fair, Your love shall be my chiefest care, And heav'n and earth shall witness be, That mortal never lov'd like me.

When you open a Valentine’s Day card with cheerful red hearts swirling around promises of abiding love, you may not realize the influence of a lovelorn medieval poet.

Geoffrey Chaucer, who famously authored The Canterbury Tales, has a “reasonably good claim to being the founder of Valentine’s Day, at least in the romantic sense,” said Angela Fulk, lecturer in Buffalo State College’s English Department, who teaches both undergraduate and graduate courses on Chaucer. “He may be the first person, at least in writing, to connect the day to romantic love.”

Penned in 1380, Chaucer’s poem The Parliament of Fowls is an allegorical tale that includes the line “On Saint Valentine’s Day, when every fowl comes there his mate to take.”

The poem tells the story of the goddess Nature instructing an assortment of birds to choose their mates for the year. Along the way, Chaucer injects a little self-deprecating humor, Fulk noted.

“He wrote a lot of love poems,” she said, “but apparently didn’t have success in love.”

Parliament of Fowls was classified in a popular genre during the Middle Ages—the dream vision—in which the narrator relays a dream to the reader.

“The narrator represents Chaucer,” Fulk said. “The dreamer falls asleep, wanders through a temple to Venus, the Roman goddess of love, where he sees reminders of the pleasurable and painful parts of love.”

One of the more painful parts occurs when three male eagles vie for the affection of a young female eagle, she said. Each makes a case for why she should choose him. The female ultimately decides she is too young and prefers to wait a year to decide. While the other birds pair up, the three male eagles are left alone.

The pairing ritual reflects the historical beginnings of Valentine’s Day, noted Martin Ederer, associate professor of history, who specializes in medieval history and church history. The festival Lupercalia, held in ancient Rome to celebrate the coming of spring, included fertility rites and the pairing of women and men by lottery.

“The feast of Lupercalia was meant to purge all evil spirits, so fertility could do its thing,” he said.

After the birth of Christianity, Christian missionaries were advised to integrate whatever was good in pagan customs, such as festive seasons and celebrations, to reinforce Christianity, Ederer explained. They decided to use the Lupercalia holiday to honor the priest Valentine, who was executed on order of Emperor Claudius II.

Because married Romans were reluctant to leave their wives to join the army, Claudius banned all marriages. Valentine, however, secretly continued to perform marriages, and paid the ultimate price on February 14, AD 270.

“He lost his head and became a martyr,” Ederer said.

Legend has it that when he was first thrown in jail, Valentine befriended the jailer’s daughter. He left her a farewell note, signed, “From Your Valentine.”

Valentines with professions of love have ensued through the centuries, gaining popularity in the mid-1800s, when postal rates dropped in Britain, Ederer said.

How has the holiday not only remained so popular but also morphed into one in which Americans spend close to $22 billion annually, according to the National Retail Federation?

No one knows for sure, but it could be one of the same reasons the holiday began.

“A few scholars believed that the holiday took off because everyone needs a bit of sweetness and light to get through the remainder of winter,” Fulk said. “Others agreed, saying, ‘Let’s celebrate love.’”