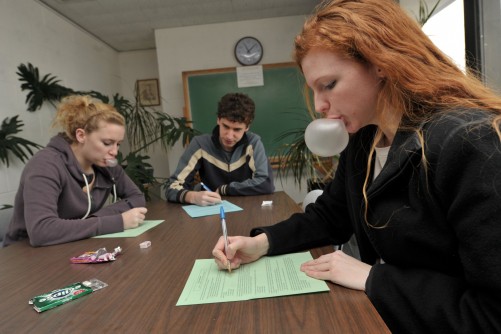 A study by a St. Lawrence University psychology professor showed that chewing gum briefly before a test can improve scores.

Newswise — Canton, NY - Have an important final exam coming up? Maybe your test prep should include chewing some gum.

St. Lawrence University Assistant Professor of Psychology Serge Onyper conducted a study that showed that students who chewed gum for five minutes before taking a test did better on the test than non-gum-chewing students. "Mastication-induced arousal" is credited for the boost, which lasted for about the first 20 minutes or so of testing. Results of the study were published in the journal Appetite.

A "battery of cognitive tasks" was given to the study participants, who chewed gum either prior to or throughout testing. Their performance was then compared with subjects who did not chew gum.

Chewing gum gave the subjects multiple advantages, but only when chewed for five minutes before testing, not for the duration of the test. Benefits persisted for the first 15 to 20 minutes of testing only. Onyper notes that a possible reason the benefits didn't continue throughout testing may be due to "a sharing of resources by cognitive and masticatory processes."

In other words, you can't chew gum and think productively at the same time.

Onyper was the lead researcher on a study presented earlier this year showing that students who took classes starting earlier in the morning tended to get higher grades, even though they may have gotten less sleep.