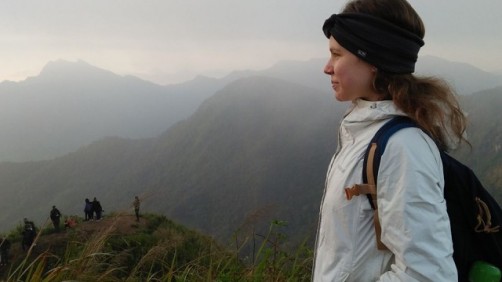 Zuckerman is the recipient of this year’s Circumnavigators Travel-Study Grant. Funded jointly by Northwestern’s Office of Undergraduate Research and the Chicago Chapter of the Circumnavigators Club, the annual $9,000 award helps one student spend the summer traveling the world and researching a topic of his or her choice.

“Food insecurity research has primarily been focused on rural areas, so I am excited to travel to urban areas and collect more city-focused data,” said Zuckerman, who is majoring in environmental sciences and economics in the Weinberg College of Arts and Sciences.

“The city of Singapore, for example, is an island with no land for farming so they import a lot of food and have an emphasis on food security,” she said.

Zuckerman will start her travels this summer in Budapest, venture to Milan, then Tokyo, Singapore, and Brisbane, Australia, and finally end her summer in Rosario, Argentina.

Already a world traveler, she has bounced between living in Los Angeles and New York City during high school, visited 30 countries, studied abroad in Iceland and interned in Germany and Italy.

When traveling, Zuckerman immersed herself in the culture by living with people from the region and eating whatever food they ate, whether fried bugs in Thailand or tarantula in Cambodia.

“Living with people who are from different countries has opened my eyes to their culture and has made me want to travel to different countries,” she said. “They eat bugs in so many countries across the world. I might be inclined to think it's gross, but I try to not think that way -- or at least cover up those thoughts by eating the bugs -- in order to respect and appreciate somebody else's culture."

$9,000Amount the award provides for summer travel and research

Zuckerman was a sustainability intern for Northwestern Dining and also has worked with Real Food at Northwestern, a student organization that works to increase the amount of “real” food -- local and community based, fair and ecologically sound and/or humane -- served on campus.

In her free time, Zuckerman does improv. She thinks it has helped prepare her to think on her feet, which was one of the qualities Northwestern and the Circumnavigators Club were looking for in a candidate.

Peter Civetta, director of the Undergraduate Research Office, said Zuckerman was the most impressive candidate he has interviewed for this reward in all his years doing it.

“I’m so grateful for how many wonderful experiences I’ve had to travel in my life so far, so I sometimes think, ‘Why would they pay for me to go to any more?’” Zuckerman said. “But those experiences have fostered my ability to be comfortable in otherwise uncomfortable situations and be mindful of different cultures wherever I am.”

Throughout her travels, Zuckerman is required to blog at least twice a week about her experience and research. Once she returns, she’ll need to begin writing a 50-page research paper to the Circumnavigators Club Chicago Chapter and Foundation.

“It’s so inherently exciting to travel to all these places and become more aware of socioeconomic issues in other cultures,” Zuckerman said. “This is a wonderful challenge for me to utilize my privilege to be able to travel around the world and do my small part to help further global food security.”