Commencement 2017: Commitment to Country and to Class

Architecture major Richard Abendroth served in the U.S. military while earning his degree at Rensselaer 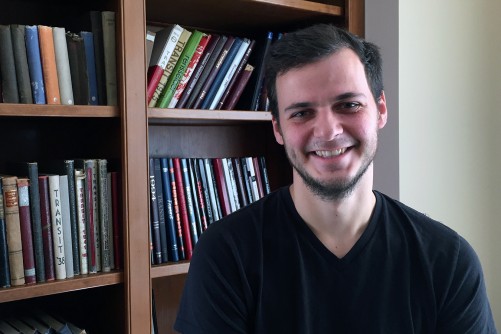 The typical path for earning an architecture degree is five years of classes, studio work, and field experiences. Richard Abendroth, Rensselaer Polytechnic Institute Class of 2017, took a somewhat different path—choosing to serve his country along the way.

Abendroth, who enlisted with the U.S. Army Reserve after high school, started as a freshman at Rensselaer’s School of Architecture in the fall of 2009. After one year, he was deployed to Iraq with his Army Reserve unit, the 299th Engineer Company (Multi-Role Bridge) from Ft. Belvoir, Virginia. Abendroth served as a heavy equipment operator.

He returned to Rensselaer in the fall of 2011 to continue his education. After two more years at Rensselaer, in the summer of 2013, he was deployed to Afghanistan with the 779th Engineer Company (Horizontal Construction), where he was promoted to the rank of sergeant. During this deployment, Abendroth was primarily acting as a heavy equipment supervisor.

He returned home to Bowie, Maryland, in the spring of 2014 when his younger brother suffered a paralyzing spinal cord injury. He remained at home to help with his care until the fall of 2015, when he returned to Rensselaer to complete his fourth and fifth year of school.

“While it has been challenging to have my education broken into segments, the school and professors have been more than accommodating,” Abendroth said. “While my graduation has been delayed, being a member of multiple class years has given me the opportunity to be exposed to a greater number of student colleagues and professors, which I think has been a positive experience.”

Abendroth said his military experience “gave me a lot of time and different perspectives to think about how my academic goals might lead into goals outside of school. It also helped me to gain a better personal understanding of why I am going to school, and how my education can affect my world and the world around me.”

“Richard is not only a gifted young architect with a promising career ahead of him, he’s also an extraordinary individual who has shown amazing courage and determination to succeed in face of great danger and hardship in his life,” said School of Architecture Dean Evan Douglis. “This is someone who served in the armed forces during his time here at RPI, not once, but twice, managed adversity within his own family, while at the same time acquiring the strength and conviction to excel in his studies here at Rensselaer. His ability to deal with these extraordinary challenges and still sustain his focus on his studies and life-long passion for architecture is a testimony to his unique character and brilliance as a role model for all of us.”

Abendroth said he was attracted to the studio environment and project-oriented focus of the School of Architecture at Rensselaer. During his third year, he had the opportunity to spend a semester in New York City at the Center for Architecture Science and Ecology (CASE). CASE is a multi-institutional research collaboration, co-hosted by Rensselaer and the prestigious architecture firm Skidmore Owings & Merrill, that seeks to “push the boundaries of environmental performance in urban building systems on a global scale, through actual building projects as research test beds. “

“It was a unique experience to be able to see firsthand some of the developments that are happening in the fields of architecture and technology,” he said.

Abendroth also worked in the School of Architecture’s Fabrication Shop while at Rensselaer. “I was exposed to 3-D printing using alternative methods and materials, and it has since become a personal hobby and interest of mine,” he said.

“I’ve had the opportunity to get hands-on with a lot of the different equipment and techniques that are available to us,” Abendroth continued. “To be able to see the full design process from conception to fabrication has been a really important aspect of my education here.”

“Also,” he said, “my minor in civil engineering has shown me the importance of multidisciplinary collaboration.” Abendroth, who made the dean's list every semester at Rensselaer, hopes to be able to continue that kind of collaboration in his career.

Soon after graduation on May 20, Abendroth will travel to Germany and Switzerland with the Rensselaer Bedford Traveling Workshop to visit sites and projects of important architectural and engineering significance.

His advice to future Rensselaer students? “Take on challenges. If you have ideas, see them through.”

Abendroth embodies the idea behind The New Polytechnic, an emerging paradigm for teaching, learning, and research at Rensselaer. The foundation for this vision is the recognition that global challenges and opportunities are so great that they cannot be adequately addressed by even the most talented person working alone. Rensselaer serves as a crossroads for collaboration—working with partners across disciplines, sectors, and geographic regions—to address complex global challenges, using the most advanced tools and technologies, many of which are developed at Rensselaer. The New Polytechnic is transformative in the global impact of research, in its innovative pedagogy, and in the lives of students at Rensselaer.