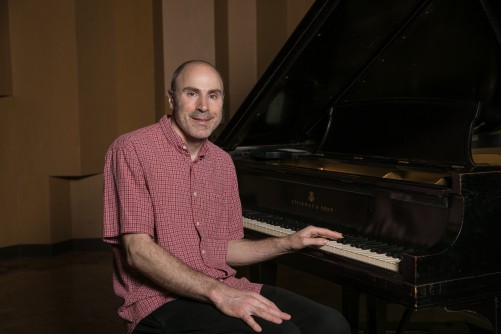 ​​​​When Ben Rivers decided to earn a master's degree in music composition at California State University, East Bay, he knew his college experience would be different from most.

“WHEN I LEARNED HOW MUCH I DIDN’T KNOW, I KNEW I WOULD NEED FURTHER EDUCATION TO CREATE MUSIC TO THE LEVEL OF QUALITY THAT WOULD SATISFY BOTH MYSELF AND MY AUDIENCES.”

In 2001, the Nevada City, California, native began experiencing the early symptoms of young-onset Parkinson's disease. Since then, Rivers, 47, has learned to live with the tremors, loss of balance, and difficulty moving that are the hallmarks of this progressive neurological disorder.

That means everyday tasks like walking to class and jotting down lecture notes often take him much longer, testing his patience and stamina.

"That first quarter, I was constantly feeling overwhelmed," recalls Rivers, who started classes at CSU East Bay in fall 2015.

"I kept thinking, 'This is too hard. I won't make it.' How can I type when I have hands that just won't do it? How can I do library research when I can't pull the books off the shelves?"

Through the campus's Accessibility Services office and state and federal assistance, Rivers has access to tutors who type for him and software that reads textbooks aloud.

"If it weren't for these resources, I would be graduating in 10 years instead of three," he says. His goal is to complete the graduate music composition program at East Bay in spring 2018.

Labeling his work "a fusion of music genres," Rivers' musical inspirations are wide and varied; he cites Beethoven, Mozart, Balinese and Persian music, The Beatles, and Radiohead as influences.

Listening to a Passion

Growing up, Rivers — who played the piano and Irish tin whistle, and took singing lessons as a child — regarded music mostly as a hobby, never seriously considering that he might turn his love of sound and rhythm into a career.

So after graduating with a bachelor's in sociology from Brandeis University, he worked at a nonprofit for six years. When the company relocated, he moved to Thailand, something he'd long wanted to do.

That wasn't the only life-changing experience he was about to have, though.

Around the same time, Rivers, then in his early 30s, began experiencing the early signs of Parkinson's. He was finally diagnosed with the disease at the age of 41. (When the diagnosis is given before the age of 50, the disorder is called young-onset Parkinson's.)

Rivers' three-year stay in Thailand transformed his outlook on his illness.

"I had all the challenges of Parkinson's — and in a foreign country," he says. "Living there, surrounded by a Buddhist culture, caused me to reflect in entirely new ways. In that culture, non-attachment to gain and loss is a cultural value, and suffering is — to a greater degree than in the U.S. — accepted as a part of life. This leads to a realization that life should be lived moment to moment with a focus on those things that are truly important. This outlook allowed me to ask myself what mattered most to me, and what I wanted to do with my life. Music was it."​

'A Musical Tradition Embodied and Expressed'

That perspective keeps Rivers moving toward his degree, even on days that can be full of profound physical challenges.

"I'm seeing not just the beauty of music history, but the benefits of incorporating music history into my perspective and work," he shares. "When we hear something on the radio, we are hearing a musical tradition embodied and expressed, and there is so much that goes into that."

"CSU East Bay has a long tradition of being a leader in composition and performance," continues Rivers, "so I feel honored to be a part of this heritage... There are excellent teachers and it is a great place to study and excel at composition."

Rivers is especially grateful for the opportunity to work with Jeffrey Miller, Ph.D., professor of theory and composition in the CSUEB Department of Music.

"Dr. Miller is my composition teacher, and it's an honor to work with someone of his caliber and experience," Rivers says. "Dr. Miller has become a mentor to me in navigating the complex pathway towards becoming a professional composer...he has taught me two critical skills: when to return to a piece and finish it, and when to walk away from a piece that isn't coalescing."

His disease has, of course, taught him lessons too.

"I've learned that I need to preserve, to return to things over and over, until I get them done," he says. "That perspective was brought to me by the Parkinson's."

"It is humbling to have this condition and to need help," explains Rivers.

Tremors sometimes stop him from completing work when he'd like to, or make him appear in need of medical help to fellow passengers on the public bus and train he rides 20 miles each way to and from campus. "I've had to learn how to ask for help, and how to trudge on through the reality of getting a master's degree and all the work involved."

Yet it's worth it, says Rivers; his master's program is allowing him to grow into his own style of musical composition.

"Composing can be exultant – a piece can express the emotions I am feeling and the thoughts I am having," he says. "But it can be far more than that. When I am an open channel and the music flows through me, I feel its source is something greater than myself. At those times, it stimulates me, captivates me and inspires me."

A Composer Is Born

Two years into his studies in the graduate music composition program and earning a 4.0 GPA, this modest musician continues to evolve as an artist.

Before enrolling at CSUEB, "I was satisfied with just working on melodies, not really understanding the complexity of the craft of composition," he notes. "But when I learned how much I didn't know, I knew I would need further education to create music to the level of quality that would satisfy both myself and my audiences."

Now Rivers is able to delve into musical structure, technique, harmony and chord changes with confidence. He's written about 40 original pieces to date and aspires to accomplish much more in his final year at East Bay.

But nothing compares, he says, to hearing one of his compositions performed; it is then that he experiences what he calls "an awe-inspiring moment."

Where others in his position may have seen only insurmountable obstacles, Rivers focuses on how to manage the barriers he encounters. "You can do anything you want if you don't give up on education. You may have to ask for help and take the long road, just don't give up," he stresses.

"Sure, you can live your life without higher education," Rivers adds, "but you may not have as many options.

"There is a level of richness that I've gotten out of higher education; my way of thinking and perspective have changed."​​