Students, employees and CSU leadership came together to advocate for doubling the maximum Pell Grant and federal support for undocumented students, among other priorities. 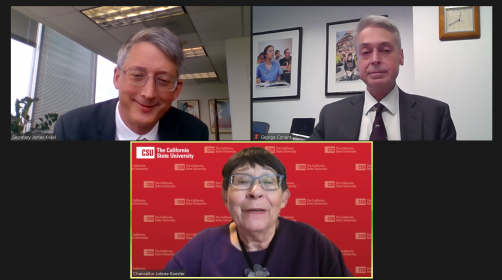 During the Hill Day kick-off event June 21, CSU Chancellor Jolene Koester led a discussion with Under Secretary Kvaal in which he applauded the university's efforts to help students earn bachelor's degrees in a timely manner as well as its impact on social mobility in the U.S.

“What I appreciate about the Cal State is the extent to which it has embraced its mission of upward mobility and creating equitable opportunity," said Under Secretary Kvaal.

“Cal State is a national leader not only in collecting student data, but how to use it to change cultures and build a consensus around the path forward. The work they are doing is important because a couple of percentage points across half a million students could change a lot of lives, but also because of the power of its example across the country."

Established in 1972, the Pell Grant is the largest financial aid grant program offered by the U.S. Department of Education to help undergraduate students from low-income households pay for college and has benefitted 81 million students across the country. Over time, though, the purchasing power of the Pell Grant has eroded from covering about three-quarters of the cost of a public four-year university, including living expenses, to covering only about a quarter of the cost.

“We are trying with a great deal of systematic effort to increase graduation and retention rates and reduce equity gaps [through Graduation Initiative 2025]," Chancellor Koester said. “Pell Grants are a particularly powerful tool in that effort as nearly half of all CSU students are Pell-eligible."

CSU campuses also held events recognizing the 50th anniversary of the implementation of the Pell Grant. San José State, for example, held a rally​ on campus June 22, during which students shared personal stories about how the program has positively impacted their lives and campus leaders called on lawmakers to double the maximum award.

“We've seen throughout the decades that Pell Grants boost college enrollment and retention, reduce student borrowing and improve overall student outcomes, making it one of the greatest federal investments ever made in higher education," said SJSU Interim President Steve Perez. “An increase in Pell Grants is a must if we are to continue down the path of equity, student success and opportunity for our students while working towards a better society."

In meetings with legislators, CSU delegates also championed for a permanent solution for Deferred Action for Childhood Arrivals (DACA) recipients. This year marks the 10th anniversary of the adoption of the DACA program, which has enabled undocumented students to work and go to school in the U.S. and make significant contributions to the country.

As the nation's most ethnically diverse public four-year university, the CSU is deeply committed to ensuring academic opportunities are available to all the state's students, regardless of citizenship status. In fall 2021, the CSU enrolled nearly 10,000 AB 540 and undocumented students. Each of the university's 23 campuses provides resources for undocumented students and employees​.