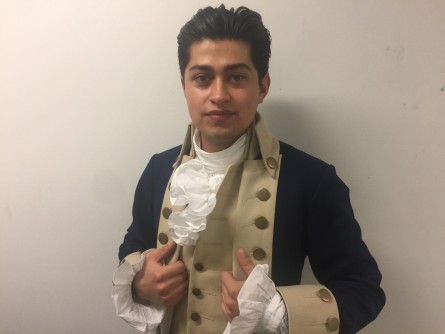 Carbajal has been preparing for his dual roles—he plays both John Laurens and Philip Hamilton in the national touring company of "Hamilton"—since January.

After months of auditions and call-backs, in November Rubén J. Carbajal, who graduated from CSU Fullerton in 2015 with a degree in theatre arts, finally got the news he'd been hoping for: He would join the national tour of the multiple Tony Award-winning musical "Hamilton."

A huge fan himself, Carbajal has been rehearsing with the cast since January 2017. The U.S. tour will begin with a preview night on March 10 in San Francisco; opening night is March 23. After a five-month run in San Francisco, the cast will also move to Los Angeles, San Diego, and Costa Mesa, along with several other U.S. cities in the coming year.

We sat down with Carbajal to get the details on his journey from the CSU to a national stage.

Q: How did you know you wanted to pursue a career in theatre?

Carbajal: "I really started taking my passion for theatre seriously in my junior year of high school. I didn't know you could major in theatre until one of my mentors—who's a performer as well—told me about this option. He encouraged me to start looking at schools to audition and apply for; not all colleges that have a theatre program may necessarily be a good fit… I started looking at schools and began talking to my parents that I wanted to pursue musical theatre. It wasn't their ideal decision, but as soon as they saw how passionate and excited I was to do something that I loved, I had their full support… When I entered CSU Fullerton's BFA program in theatre arts, I receive affirmation from my professors and peers, and I knew it was something I wanted to dedicate my energy to after graduation."

Q: Tell us about the roles you play in "Hamilton" and how you're preparing to play multiple characters.

Carbajal: "In Act One, I'll be playing John Laurens [one of Hamilton's best friends] and in Act Two, I'll be Philip Hamilton [Hamilton's eldest son]. John Laurens was a fierce abolitionist, while Philip Hamilton has an innocent and loving nature with a willingness to make his dad proud. There's a reason why the two characters are grouped so that the same actor plays both. They are relentless, courageous, and stand up for what they believe in. For me, it's about finding the similarities and differences in both characters and preparing for the beginning, middle and end of each character… This is also my first big show; I've never performed eight shows a week. Throughout the rehearsals, I'm paying close attention to my physical and mental health."

Q: Who from CSU Fullerton has been the biggest influence in your professional career?

Carbajal: "Professor Mitchell Hanlon, who's the head of the musical theatre program. In the second half of my sophomore year at CSU Fullerton, Professor Hanlon approached me about voice lessons. This meant a lot to me because I knew his schedule was booked, and it was exclusive to be on his list of vocal students. For him to approach me and want to work with me was really motivating. I look voice lessons from him that semester and my entire senior year. He encouraged me not only to become a stronger singer, but also to pick stronger material for my auditions. I learned more about music theory and how to learn notes more quickly. I've noticed that the professional world moves very quickly. With 'Hamilton,' I had to learn 50 songs in a week. Professor Hanlon was one of the first from CSU Fullerton to call and congratulate me when I was cast in the musical."

Q: What lessons have you learned so far in your professional journey?

Carbajal: "Let things fall into place, but also work as hard as you can to make space for those things to fall into place. You can't spend all your time trying to make it in this industry because that's not how it works. But you also can't sit back and wait for opportunities to come to you. You have to be proactive every day. Someone once told me that everyone trying to make it in this industry has a ticket and is standing in a long line. Some people get impatient and leave the line with their ticket. But if this is something you really want, you have to keep your ticket and keep your place in line."Q: Any advice for others who want to be in the theatre?

Carbajal: "Do at least one thing every day to further your career… whether that's finding a new song to sing at auditions, reading a scene from a play and studying it to discover the character, or simply watching a movie and being inspired. It's a marathon, not a sprint. You can't build your repertoire and read every play in a single day; it takes time. If you spread that evenly over the course of your career, you just have to do one thing every day."Q: Is everyone you know asking you to get them tickets to "Hamilton"?

Carbajal: "They ask by not asking, saying they 'hope' they can catch one of my shows. The tickets for Los Angeles haven't actually gone on sale to the public yet. My best piece of advice would be to sign up for notifications for when tickets go on sale [for LA]. The San Francisco shows sold out in 18 hours!"