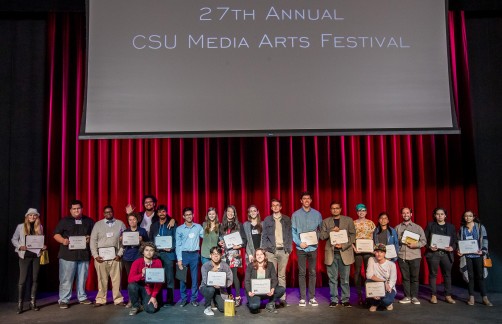 Newswise — Visual arts students from across the state convened at CSU Dominguez Hills for a special opportunity to present their work in front of entertainment industry leaders at the 27th annual CSU Media Arts Festival (MAF).

Since 1991, MAF has been a platform for talented CSU students studying film, broadcasting, video, screenwriting and new media to have their work critically reviewed by industry professionals. Through a highly selective process, the work of the chosen finalists is showcased at the annual event, followed by an awards ceremony. Winners are determined by a set of entertainment industry judges and distinguished faculty.

This year, MAF received more than 190 entries from 19 CSU campuses. Twenty-seven visual arts and screenplays were shown at the festival, with a total of 10 winners awarded in various categories, including Best in Show.

The prestigious MAF award is a true testament to students' skills and talent in the arts. Last year's Best in Show winner, Cal State Fullerton's Gibran Rubio, continued on to enter his short film into the Broadcast Education Association's festival, as well as the Humboldt International Film Fest. Rubio graduated from CSUF shortly after his victory at MAF and landed a job in post-production at BuzzFeed.

"As a competition for a chance to have their work critically viewed by industry professionals, the CSU Media Arts Festival is such an effective way for students to sharpen their craft," said Candace Egan, an MAF faculty judge from Fresno State. "Their works are judged by highly experienced people in the entertainment and media fields, giving students real-world perspectives."

The first panel, "Understanding Copyright and Fair Use," included two lawyers from the CSU's Office of General Counsel, Jennifer Glad and Victor I. King, who spoke about fair-use permission of music and other intellectual property, as well as copyright infringement.

The second panel discussion, "Shooting on Location and Getting Permission To Do So," covered location scouting and obtaining necessary permissions to film. Panelists included Tasha Day, manager of Special Events and Filming at the Long Beach City Manager's Office and Cassandra Hesseltine, a film commissioner at Humboldt-Del Norte Film Commission and president of Film Liaisons in California Statewide.

"The panel sessions are invaluable segments of the MAF," said Egan. "Students receive information that are typically learned on the job. Panelists provide our students with insight from years of experience working in the field and prepares them to hit the ground running in their careers."