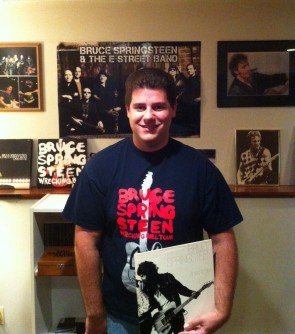 Newswise — A long-time fan of Bruce Springsteen’s music, Stonehill College history student William Pellegrino took his appreciation of Springsteen a step further this year and studied how the Boss' approach to songwriting evolved in reaction to four major American disasters: 9/11; the wars in Iraq & Afghanistan; Hurricane Katrina; and the great recession.

“The music of Bruce Springsteen traces these disasters, both man-made and natural, as he explores in-depth the outcomes and human reactions to these crises,” he writes in his senior thesis, entitled "My City of Ruins: Bruce Springsteen and the American Reaction to Disaster.”

Pellegrino's senior thesis has won the sixth annual Peter R. D’Agostino Prize for Excellence in History at Stonehill College in Easton, Mass. Supervised by History Professor Shane Maddock, Pellegrino examined in detail the themes and messages in Springsteen's songs over a ten-year period. Pellegrino, of East Bridgewater, Mass., just graduated from Stonehill in May with a bachelor’s degree in history.

Pellegrino writes: “The Rising as an album consists of a series of psychological perspectives representing American reactions to 9/11. Springsteen expressed antiwar sentiments during the tour in support of that album, as well as during the 2004, 2006, and 2007-2008 tours and on the Devils & Dust, We Shall Overcome, and Magic albums. Also on the 2006 tour, Springsteen demonstrated a response to Hurricane Katrina that represented the frustration surrounding the recovery effort, as well as applauding the spirit that would revive the city of New Orleans.

“Finally, on both the Wrecking Ball album and during the 2009 and 2012 tours, he provided thoughts about the new roles that social and economic classes would be forced to play. Bruce Springsteen’s music stands as a testament to several American traits – a strong national resilience in the face of pain, an immediate and emotional response (for better and for worse), a questioning of what is just, and a hard-fought attempt to repair shaken national and personal identity – all of which manifested themselves in crucial ways as a response to tragedy at the start of the new millennium.”