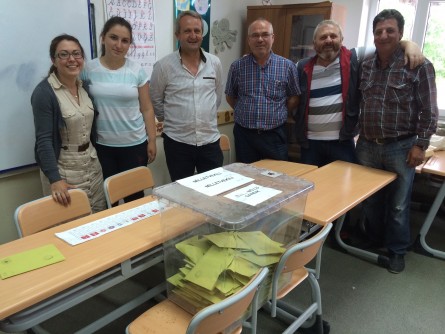 Evren Celik Wiltse, far left, serves as an election observer during the June 2015 election in Turkey.

Newswise — When American and European leaders roll out the red carpet for rogue leaders, such Turkey’s Recep Tayyip Erdogan, Chechnya’s Ramzan Kadyrov and Russia’s Vladimir Putin, they grant legitimacy to those who suppress opposition and support terrorism, according to assistant political science professor Evren Celik Wiltse. “It’s time to stop pretending ‘all is good,’ until the dysfunction drowns us all. We must deny red carpet treatment to these repressive leaders.”

Rogue leaders have significant costs for the international community, asserted Wiltse, who is an Ankara native.

Americans had a front row seat to the heavy-handed techniques of Erdogan’s security forces in May 2017 when they beat up and hospitalized protestors in Washington, DC. Turkey not only gags its own dissident citizens, but also holds German journalists and American citizens hostage in its prisons, Wiltse explained. Furthermore, Erdogan’s temperamental leadership is jeopardizing the NATO bases in Turkey, as well as the NATO operations in the Middle East.

Chechnya is among of the top exporters of global terror, including the two brothers who plotted the Boston bombings, she noted. Russia is one of the top destinations of illicit gains and money laundering. Today, the American public is still trying to sort out the toxic Russian influence in its presidential elections.

Wiltse can be reached for comment on the ramifications of these repressive leaders at 605-688-4311 or Evren.Wiltse@sdstate.edu. You can follow her on Twitter at @EvrenWiltse. Wiltse, who spends several months each summer in Turkey, earned her undergraduate and graduate degrees from Bogazici University in Istanbul, Turkey, and her doctorate degree from the University of Massachusetts-Amherst.

She is the 2015-16 Daschle Research Fellow at SDSU, working on the NAFTA at Twenty project. Her latest book, “Democratic Reform and Consolidation: the cases of Mexico and Turkey,” was released in 2015 by Colchester: ECPR Press.