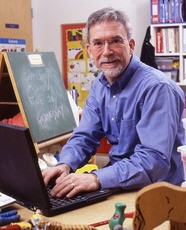 Newswise — The University of Virginia Curry School of Education has been awarded $10 million from the U.S. Department of Education's Institute of Education Sciences to determine if a new method for training preschool teachers results in their students, especially disadvantaged children, learning language and literacy skills better. The stronger foundation would enable them to continue building academic success through their school years. A significant goal of the nationwide study, led by education professor Robert Pianta, is to help close the achievement gap between children at risk of failing in school and their more academically successful and affluent peers.

Nearly 70 percent of the nation's 3- and 4-year-olds are enrolled in preschool programs, and the number is growing, according to the National Institute for Early Education Research. Yet "there is little evidence that current approaches to training produce demonstrable gains for children," said Pianta, the Novartis US Foundation Professor of Education. He and his U.Va. research team have found a way to enhance teachers' effectiveness in the classroom, using one-on-one coaching via a Web-based conference system, called My Teaching Partner. Pianta will head the National Center for Research on Early Childhood Education, where student-teachers will be trained to use the MTP program before they get their own classrooms, and the center will provide consultation to the new teachers in their first jobs.

This five-year study will be the first of its kind to conduct a large-scale, randomized, controlled experiment with partner teacher-education colleges to test whether this new method of including a course developed for preparing preschool teachers actually makes them better teachers and shows in children's learning and social interactions.

Colleagues at the University of North Carolina at Chapel Hill and UNC-Greensboro, plus the University of California at Los Angeles, and the U.Va. researchers, will work with about 550 student-teachers mostly from two- and four-year institutions in several large urban areas in Chicago, Los Angeles and central Florida.

"The partners are showing a willingness to participate and accept a large amount of innovation," Pianta said. "The grant for the center will allow us to have a considerable impact on the policy, practice and training of early childhood educators, in addition to the research."

Preschool programs exist in a variety of places — from public elementary schools to typically smaller settings — private schools, churches, day-care centers. The teachers have a variety of educational backgrounds. Although they probably have learned basic child development and curriculum ideas, they are not taught how to apply that curriculum or how to interact with the diversity of children in their classes, Pianta said.

Several recent studies have shown that teachers' education and experience do not show whether or not they teach well. Yet studies also have shown that children's early success in school influences their continued academic achievement.

Pianta and his research team have made the connections between teacher and student by capturing on video what it is a great teacher does that makes children succeed. In a recent Child Development article, Pianta and his team showed that teachers who provide high levels of instructional support and emotional support for children close the achievement gap for at-risk children — they get higher marks on standardized tests and are better adjusted socially and emotionally.

"A lot of terrific teachers aren't aware of the really good things they do," Pianta said. "When we point it out, it becomes an insight they can share with others."

Student-teachers will get exposure to videos that demonstrate model classrooms. Clips of the videos are slowed down and edited to pinpoint specific examples of interactions so that viewers might better understand the effects of nuances, such as tone of voice, verbal feedback and emotional dimensions, and to trace the richness of vocabulary and language used. The videos show the teacher's performance isn't too didactic, but also doesn't look like an accident, said Pianta, who has taught at the University since 1986.

Some student-teachers will take part in both activities, the course and consultation; two other groups will get one or the other, and another group will serve as the control group, receiving the education presently offered in the program in which they're enrolled.

"We are geared up to make a big impact on the training needs of early childhood educators. This is rigorous and programmatic research on teacher-training that could be used by any teacher or program," Pianta said. The study also creates a new precedent for research on teacher education at any grade or age level, not just pre-kindergarten, he added.

In addition to the U.Va. center on early childhood education and development, the Institute of Education Sciences recently awarded centers on three other areas: gifted and talented education, local and state policy, and postsecondary education. The IES mission includes developing and evaluating the effectiveness of programs, strategies and products that are intended to increase student learning and achievement, and ensuring that information on what works and how to implement it is conveyed to education practitioners and policy makers.