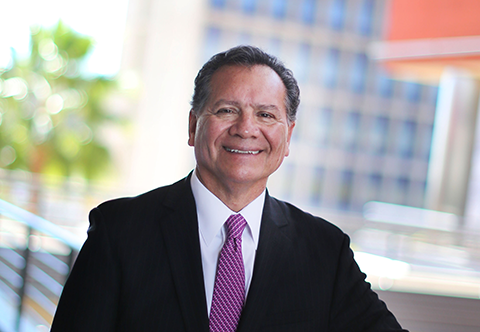 Newswise — George L. Pla, a successful entrepreneur and philanthropist whose business and civic activities have helped communities across California, will be awarded a California State University, Los Angeles Presidential Medallion during Commencement 2017.

Cal State LA President William A. Covino will present the medallion on May 20 during the College of Natural and Social Sciences Commencement ceremony. The medallion is the University's highest honor and is bestowed upon individuals who have displayed outstanding leadership and extraordinary service to the students and faculty of Cal State LA.

“George Pla is one our most distinguished alumni and we are pleased to honor him with a Presidential Medallion," Covino said.

Pla earned a bachelor’s degree in sociology from Cal State LA in 1972 and a master’s degree in public administration from USC in 1974. In 1991, he was honored as Cal State LA’s Alumnus of the Year.

“He’s an inspiration to our students, and our community,” said Cal State LA Executive Vice President Jose A. Gomez. “George demonstrates that with opportunity comes responsibility.”

Pla has led Cordoba Corporation for more than 30 years. It is one of the top firms of its kind, providing services for large public infrastructure projects across the western United States. His professional achievements have been recognized by the Hispanic Business Magazine, where he was named as one of the 100 Most Influential Latinos in the nation.

Pla’s has been a strong supporter of higher education and has served as a regent emeritus at Loyola Marymount University, presidential associate at the University of Southern California, and co-founder of the USC Latino Alumni Association.

Pla currently serves as the co-chair of the Southern California Leadership Council, a non-partisan, non-profit public policy partnership comprised of business and community leaders. He is a co-founder of the City Club, a premier private business club in downtown Los Angeles that embraces and reflects the diversity and spirit of the city.

He is a member of the Board of Trustees of the California Science Center Foundation, and he chaired the planning and engineering efforts of the transport of the Space Shuttle Endeavour. Pla is a past member of the Board of Directors for the Catalina Island Conservancy, which stewards approximately 42,000 acres on Catalina Island through a balance of conservation, education and recreation.

Cordoba Corporation is ranked by Engineering News-Record as one of the top professional services firms in the nation and transported the Space Shuttle Endeavour through the streets of Los Angeles in 2012 as more than 1 million cheering bystanders watched the historic event.